Cryptid Wiki
Register
Don't have an account?
Sign In
Advertisement
in: Hoax, Cryptids, Dinosaurs and Pterosaurs,
and 15 more
English

The Kasai Rex is a gigantic theropod cryptid from the Democratic Republic of the Congo in Africa.

It is said to be a surviving species of theropod dinosaur, such as a Tyrannosaurus rex or Giganotosaurus; as the cryptid's namesake; although quite a low possibility; if its indeed an alive African theropod it's likely a species of spinosaurid; abelisaurid; allosaurid; or a carcharodontosaurid; as there have been no known species of tyrannosaurid ever depicted and recorded in Africa.

In one day of 1932, the experienced Swedish hunter, John Johnson (sometimes called Johanson) wanted to hunt a huge elephant, so he and his servant left their camp in Capetown. They crossed a swamp until finally reaching the savanna, in the Kasai valley, which seemed desolate, as there were no animals anywhere. That was until the servant yelled in excitement when he saw two elephants, so Johnson got his shotgun ready, but something was wrong with them. There were only two, instead of an entire herd.

About 44 meters away, there was something in the underbrush stalking the elephants. And suddenly, this something, a strange creature, jumped. The servant dropped into the undergrowth, while, Johnson paralyzed, changed aim, and decided to shoot this strange creature. He shot the creature three times, and only one shot hit it, hitting it in the back. The creature backed away, and left. Johnson got his servant up from the ground, and decided to go back to his camp in Capetown, but first, they had to cross the swamp. When they were halfway the swamp, they heard a splash, and thought of crocodiles. Johnson looked everywhere, until they saw 22 meters away the same creature that they saw in the savanna, tearing the hump of a rhinoceros, and that with one bite, tore one of the rhinoceros' legs off. Johnson's servant ran terrified, while John stayed there.

He immediately thought of shooting the creature, but remembered terrified that the servant had taken his shotgun. But he still had his camera, so he took a photo of the creature, which upon hearing the click, sank quickly into the lake, while the rhinoceros' body floated in a pool of blood.

Upon returning to camp, John walked shivering and shaking the camera, collapsed, and the men in there picked him up. "It was reddish in color, with blackish-colored stripes," he said in his interview with the newspaper Rhodesia Herald. "It had a long snout and numerous teeth." He decided that the creature, 13 m (43 ft) long, was a Tyrannosaurus, and also said "The legs were thick; it reminded me of a lion, built for speed". At the beginning of the year 1933, a group made up of five hunters (among them a recognized ivory trafficker), went to the Kasai Valley to hunt the creature called Kasai Rex by the newspaper Rhodesia Herald, which they thought was a crocodile giant, and that they would hunt to sell their skin at a good price.

They arrived in the Kasai Valley, and passed through the same swamp where Johnson had passed the previous year. One of the hunters was frightened to see a reddish tail sink into the lake, they thought it was an anaconda, until the atmosphere became tense. They readied their weapons, but were surprised by a wave of water that fell on them from the left side. The reddish tail had left the marsh violently, and hit one of the hunters, who fell into the water.

The other four began to shoot a reddish mass that submerged, they saw nothing, only waves of water that dispersed throughout the surface. The fallen man, with a broken arm, got up and tried to reach his companions. A roar was heard from under the water, they moved as fast as possible, but their path was hindered by a giant creature that came out on the right side, and that was submerged on the left side. The hunters had hidden themselves in a rock, and in the end they left there.

Robert Henderson was a considered great hunter and expert zoologist who had over 100 animal heads that he himself had hunted during his safaris. Although everything is different now, it should be mentioned that hunting at that time was not considered a crime, but rather a hobby. In 1950, Robert Henderson thought about making a trip to Africa in the jungles of the Congo, ensuring that he would find exotic and never discovered species. However, the trip was delayed for a year due to the death of his wife, and in August 1951, Henderson made his trip to Africa in the Kasai Valley. The town of Mutombo Lamata, where Henderson had settled, said that hunting was the only thing that could made him smile, after the event of his wife. With the help of 5 natives, Robert passed by the Kasai river in a jeep, because he knew that his prey was beyond just it. The safari was considered to be about 6 days, and they would camp so that Henderson had enough time to hunt. However, after the sixth day, the people didn't saw them coming back, so they waited a few more days, thinking they wouldn't come back because it had rained, and the river had gotten bigger. They still didn't come back, so a group of 10 people from the village and 5 people from the military regiment were sent to find them. The next day, they found traces of a camp, seeming to be the initial base of Robert and his group. The rescue group estimated that they were there for two days. It was thought that Henderson had gone to the depths of the Kasai Valley to hunt something else, since they had already found skin and gazelle viscera near the camp. The rescue group camped there and the next morning they continued their search. The strange thing was that the valley seemed desolate, there were no signs of life anywhere, but after having walked several kilometers, they found Robert and his group, but not in the way they expected. A massacre had happened. They had found a temporary camp, which was completely destroyed. About 10 meters around, there were several pieces of Robert's companions, with limbs and heads everywhere, some being crushed and with torn flesh. The remains were mixed up, so much so that it was impossible to tell who each one belonged to. Of Robert, it was only found a forearm with his hand included, in bad condition, but nothing more. An investigation of the case was made, and the official version of the events gave two hypotheses. The first one was that what had happened was caused by illegal hunters, presumably ivory traffickers, but the marks on the bodies did not match up with bullets or knives. The second hypothesis was that it was some animal who killed Robert and his group, as even the remains appeared to have been chewed up and subsequently spat out. But nevertheless, Robert's gun had been fired, as shotgun bullets were found at the scene, and still, no animal corpses were found nearby. There was no way a hunter as experienced as Robert could have failed to shoot any animal that would attack them. In addition, it was not explained what had happened to the crushed body parts, including a head. After several years, the case was closed without any truthful conclusion. However, there was a mysterious detail that the case left out. The rescue team described that it seemed that something huge and heavy had advanced on them and the camp.

The cryptid is long thought out to be a theropod; in case it is real. As the name implies a heavy connection with tyrannosaurs. However, no known tyrannosaur as well as any tyrannosaurid species ever lived in Africa, but theropods similar, potentially larger; in the size, overall shape, reported and lived in Africa, it is none other than the Carcharodontosaurus saharicus. The Carcharodontosaurus was one of the apex predators of Early Cretaceous Africa, and was also known to compete over food and territory with Spinosaurus aegyptiacus, Baharisaurus ingens and Deltadromeus.

Spinosaurus Aegyptiacus was an another apex predator that grew 41 to 55 foot long carnivore from Northern Africa, from Egypt to Morocco. It ate a wide variety of prey such as the aquatic animals from its habitat like large Crocodylmorphs, multiton fish Lepidotes and Onchopristis; and terrestrial animals like İguanadontids, such as Ouranosaurus, as well as subadult and juvenile sauropods. No full or nearly complete skeleton has been discovered. There's a possibility that it was likely the largest theropod known. In addition; Spinosauridae; either Spinosaurus, Sigilmassasaurus or another species of large spinosaurid; are also suspected to represent sightings of Nguma-monene and Niger firespitter.

Carcharodontosaurus Saharicus was a 30 to 45 foot long carnivore from northern Africa as well as some parts of South Africa.

Both creatures lived in swampy places around 70 million years ago. They would have eaten Paralititan, Ouranosaurus, Aegyptosaurus, and if needed the scavenging abelisaur Rugops.

Sceptics argue that if it were an african theropod, it would more likely be a Spinosaurus, Afrovenator, or Carcharodontosaurus, as no known Tyrannosaurs have ever been recovered from africa. 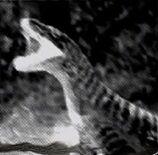 The third photograph of the Kasai rex, proven to be a lizard cut-out from a magazine.

A comparison of the second picture with the original statue.

Interpretation of the sighting.

Drawing of the sighting, based on the second picture.

A picture of the Kasai valley..?

If Kasai Rex is not a living theropod dinosaur, but a gigantic bipedal terrestrial crocodilian that convergently evolved to be similar to the Mesozoic carnosaurs and tyrannosaurs, evolving dinosaurian-looking hip bones and ankles to be able to walk bipedally.
Русский
Community content is available under CC-BY-SA unless otherwise noted.
Advertisement