In Southeast-asian mythology, Kabandha (कबन्ध, Kabandha, lit. "headless torso") is a demonic cyclops that is killed and freed from a curse by the god Rama – an Avatar of Vishnu – and his brother Lakshmana. Kabandha's legend appears in the Hindu epics Ramayana and Mahabharata, as well as in later Ramayana adaptations. Kabandha was a gandharva (celestial musician) named Vishvavasu or Danu, who was cursed and made into an ugly, carnivorous demon by Indra, the king of the gods, and/or a sage.

Cyclops, (Greek: “Round Eye”) in worldwide legend and literature, any of several one-eyed giants to whom were ascribed a variety of histories and deeds. In Homer the Cyclopes were cannibals, living a rude pastoral life in a distant land (traditionally Sicily), and the Odyssey contains a well-known episode in which Odysseus escapes death by blinding the Cyclops Polyphemus. In Hesiod the Cyclopes were three sons of Uranus and Gaea—Arges, Brontes, and Steropes (Bright, Thunderer, Lightener)—who forged the thunderbolts of Zeus. Later authors made them the workmen of Hephaestus and said that Apollo killed them for making the thunderbolt that slew his son Asclepius. In Asia, the cyclops appears as Kabandha, a demon with no head or neck with one large eye on the breast and a mouth on the stomach. Kabandha appears in Hindu-Buddhist mythology as a character of Ramayana.

The Mahabharata describes him thus: Kabandha was "as big as a mountain, dark as a black cloud, with pointed hairs all over his body and looked fierce with a voice as loud as thunder. He had an eye on his stomach, round and yellow, emitting a glare like a fire-name. Looking wicked he thrust his big tongue out of his huge mouth licking the sides." The Ramayana presents a similar description of Kabandha. Kabandha had a broad chest and was without a head or neck. He had only one eye on his chest and a mouth on his belly. He used his long arms to draw his prey closer. Kabandha is often depicted as a tree. Since Vishvavasu now did not have a head, but just two arms and a mouth on his stomach, he came to be known as the Rakshasa (demon) Kabandha, the "headless torso". The word Kabandha is often used to describe a large big-bellied barrel or a headless tree trunk, shaped like a barrel, which retains its vitality.

Adhyatma Ramayana tells that Kabandha was a fierce cannibal and his arms were eight miles long. His huge face – which had no ears – was at his chest. He had no head or legs.

The demon blocked the path of the brothers, who tried to escape by taking a different route, but were finally caught by Kabandha. The demon grabbed Rama in his right arm and Lakshmana in his left. Finding themselves helpless in Kabandha's clutches, Lakshmana appeals to Rama to escape and find Sita, leaving him behind as a sacrifice to the demon. Rama consoled him. Kabandha declared that he was extremely hungry and asked them who they were who had come to sate his hunger. At this time, Lakshmana realized that the strength of the demon lay in his hands and suggested that they cut off the demon's hands. Annoyed by the brothers' conversation, Kabandha decided to eat them at once and drew them closer to his mouth. The brothers drew their swords and quickly cut off the arms of the demon, who fell down with a mighty roar. The fallen Kabandha again asked for the names of his vanquishers. Lakshmana introduced himself and Rama and asked the demon who he was. Kabandha narrated his story to the brothers and declared that he recognized Rama by the very fact that Rama had severed his arms. Kabandha requested that Rama perform his cremation rites, offered him what information he could, and died.

While other adaptations tell a tale about the encounter similar to Ramayana, Mahavira-charita is a notable exception. A woman called Shramana is caught in the clutches of Kabandha and calls for help. While roaming in the Dandaka forest, Rama hears her call and sends Lakshmana to check. Lakshmana kills Kabandha and leads Shramana to Rama. Shramana turns out to be a messenger of Vibhishana (Bibhishana) – brother of Ravana – who has joined forces with Sugriva against Ravana. Anargharaghava mirrors the Mahavira-charita, replacing Shramana with Guha, a forest chief who leads them to Sugriva. 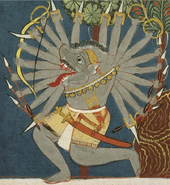