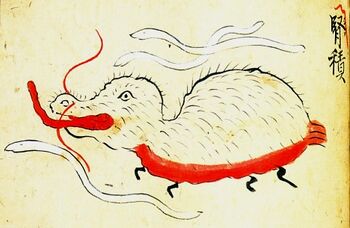 Jinshaku or Honton is one of the 63 creepy germs written in Harikikigaki, a book of medical knowledge written by an unknown resident of Osaka, Japan.

It resembles a tiny boar that wreaks havoc on a body making it develop a weak pulse, dark complexion, a craving for salty food, and bad breath. However, it is most likely the lack of hygiene that causes these cravings and feelings.

The book is mostly considered a written version of a tale.

Japan’s Kyushu National Museum holds a copy of the Harikikigaki — a 16th century medical text of unknown authorship which claimed that diseases were caused by tiny bugs that crawled into the body. The Harikikigaki advises using acupuncture and herbs to deal with the bugs.

Well into the Modern Era (the late 19th century), Japanese people believed illness was spread by evil kami called yakubyogami. At first these gods were thought to take human form, but later, influenced by thinking in texts from China, some people came to think of them as little creatures as small enough to enter the body. The Harikikigaki, written in 1568, is mostly about acupuncture, however, this rare text includes 63 color depictions of the various mushi (germs) believed to cause diseases.