Cryptid Wiki
Register
Don't have an account?
Sign In
Advertisement
in: Cryptids, Dragons and Dragonoids, Giant Bat,
and 11 more
English

The Jersey Devil is a creature native to the Pine Barrens of New Jersey. It is often described as having hooves, a snake's tail, bat-wings and a head that looks something like a horse. While there are many stories detailing the origin of the Jersey Devil, sightings have been reported beginning in the 1700s and continuing on until the past decade. The creature is deeply rooted in folklore and legend in the area, and is still mildly popular in various media, from sports teams to video games.

This Jersey Devil often glows, and it can breathe fire or poison water with its breath, both classic dragon characteristics. The Jersey Devil of folklore

is also known as the Leeds Devil. Local residents trace its origin to a woman named Mother Leeds, the mistress of a British soldier who was suspected of being a witch. When she gave birth to her thirteenth child, she cursed it. The baby was born as a hairy creature and soon took to terrorizing the populace and eating children.

Place of the Dragon

The Lenape tribes called the area "Popuessing" meaning "place of the dragon". Swedish explorers later named it "Drake Kill" ("drake" being a word for dragon, and "kill" meaning channel or arm of the sea (river, stream, etc. in Dutch).

According to Americanfolklore.net, Joseph Bonaparte, elder brother of Napoleon, is also claimed to have witnessed the Jersey Devil while hunting on his Borden town estate around 1820.

The story follows as:

"One snowy afternoon, [Joseph Bonaparte] was hunting alone in the woods near his house when he spotted some strange tracks on the ground. They looked like the tracks of a two-footed donkey. Bonaparte noticed that one foot was slightly larger than the other. The tracks ended abruptly as if the creature had flown away. He stared at the tracks for a long moment, trying to figure out what the strange animal might be."

At that moment, Bonaparte heard a strange hissing noise. Turning, he found himself face to face with a large winged creature with a horse-like head and bird-like legs. Astonished and frightened, he froze and stared at the beast, forgetting that he was carrying a rifle. For a moment, neither of them moved. Then the creature hissed at him, beat its wings, and flew away."

The Jersey Devil of modern sightings are wildly different things. The name has been applied to cryptids that more or less resemble the original Jersey Devil, but it is also applied to nearly every New Jersey cryptid imaginable, such as hairy humanoids that resemble Bigfoot, mystery birds, and even Eastern cougars. One "Jersey Devil" sighting described a hairy humanoid with a deer's head and glowing red eyes. A number of well-publicized but not very convincing hoaxes have managed to confuse the matter even more, scaring researchers away from the topic.

In 1934 near South Pittsburg, Tennessee a Phantom Kangaroo or "kangaroolike beast" was reported by several witnesses over a five-day period, and to have killed and partially devoured several animals, including ducks, geese, a German Shepherd police dog and other dogs. Kangaroos are typically unaggressive and vegetarian. A witness described the animal as looking "like a large kangaroo, running and leaping across a field." A search party followed the animal's tracks to a mountainside cave where they stopped.

In cryptozoology, the Jersey Devil is one of those weird creatures that many investigators prefer to ignore. When it is thought to be an undiscovered species of animal, it is generally classified as a living pterodactyl, perhaps a genus similar to the dimorphodon. The Jersey Devil is apparently located in the Pine Barrens, a heavily wooded area in New Jersey. It was thought to have a connection with the Montauk Monster.

During the week of January 16 through 23, 1909, newspapers of the time published hundreds of claimed encounters with the Jersey Devil from all over the state. Among alleged encounters publicized that week were claims the creature "attacked" a trolley car in Haddon Heights and a social club in Camden. Police in Camden and Bristol, Pennsylvania supposedly fired on the creature to no effect. Other reports initially concerned unidentified footprints in the snow, but soon sightings of creatures resembling the Jersey Devil were being reported throughout South Jersey and as far away as Delaware and Western Maryland. The widespread newspaper coverage led to a panic throughout the Delaware Valley prompting a number of schools to close and workers to stay home. During this period, it is rumored that the Philadelphia Zoo posted a $10,000 reward for the creature's dung. The offer prompted a variety of hoaxes, including a kangaroo with artificial wings.

The Jersey Devil is a popular creature in New Jersey, with its image on quite a number of products. The creature is even the namesake for the NHL hockey team the New Jersey Devils. It is also a popular image outside of the state. The Jersey Devil is one of those major American monsters that gets mentioned rather frequently in books about the strange, the paranormal and the unexplained. Two fictional movies have been made about the Jersey Devil: The Last Broadcast and 13th Child: Legend of the Jersey Devil. It has also been It has also appeared numerous times in modern popular culture, including film, television, literature, music and video games, like the Wolf Amongst Us, where the Devil works for the Crooked Man.

The cryptid was also the focus on the X-Files episode, "The Jersey Devil". Unlike more common and fantastic descriptions, the Jersey Devil of the episode is instead likened to a feral humanoid or possible subspecies of mankind. While this flies in the face of all the traditional descriptions of the creature, the lack of special effects budgeting in the early episodes of the X-Files undoubtedly forced the producers to make a more cost-effective version of the creature.

The region most commonly stalked by the creature is known as the Pine Barrens, a region known for highly acidic and sandy soil unsuited for traditional European methods of farming. This meant that as European settlers moved into the region, those with the means avoided the region as much as possible Only those with dire needs would settle in the region and becoming known as "Pineys". Made up of the outcasts and less reputable members of colonial society, this reputation gave those outside the Barrens even more of a reason to stay far from the Pine Barrens.

It is possible that the creature's origins from the Pine Barrens from the Leed's family were a form of social discrimination taking the form of folklore. The creature's fearsome reputation, combined with the foul reputation of the family it came from, would only encourage locals to avoid the region for fear of being caught by the Jersey Devil. 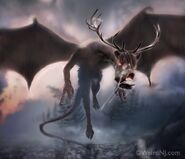 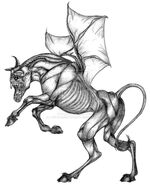 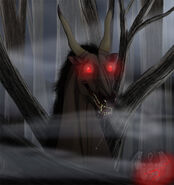 Is this a legitimate Wanted bounty poster for the Jersey Devil, or is it a faked picture? 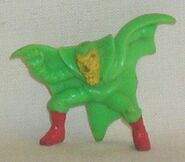 Jersey Devil in Monsters in My Pocket

Hoove of the Jersey Devil in the Lost Tapes. If necessary, zoom until you see a gray thing.

As the main character of the PlayStation game, Jersey Devil

Jersey Devil Art from by Vincent-Covielloart

Jersey Devil - Protector of the Pines

The JERSEY DEVIL is the CHAMPION OF THE PINES!

THE CHAMPION OF THE PINES is headed to Amazonia in #5 comic book.

The Jersey Devil from the TV show Legand Quest

Drawing of a Jersey Devil found on a video from Sir Spooks.