The Jackalope or Antelabbit (Also known as the Warrior rabbit) is a mythical animal of North American folklore. It is also known as Lepus temperamentalus.

It is described as a jackrabbit with antelope/pronghorn horns or deer antlers and sometimes a pheasant’s tail (and often hind legs). The word “jackalope” is a portmanteau of “jackrabbit” and “antelope”, an archaic spelling of “antelope”.

It is possible that the tales of Jackalopes were inspired by sightings of rabbits infected with the Shope papilloma virus, which causes the growth of horn and antler-like tumors in various places on the rabbit’s head and body. This can occur in cottontail rabbits under natural conditions and in domestic rabbits under experimental conditions. Systemic regression of warts occurs in a variable proportion of rabbits as a consequence of a specific cell-mediated immune response. Persistent warts may progress into invasive carcinomas. Progression into carcinomas is observed in approximately 25% of cottontail rabbits and in up to 75% of domestic rabbits with persistent warts.

The Jackalope has bred the rise of many outlandish (and largely tongue-in-cheek) claims as to the creature’s habits. For example, it is said to be a hybrid of the pygmy-deer and a species of “killer rabbit”. Reportedly, Jackalopes are extremely shy unless approached. They can run up to 90 miles per hour. Legend also has it that female jackanapes can be milked as they sleep belly up and that the milk can be used for a variety of medicinal purposes. It has also been said that the Jackalope can convincingly imitate any sound, including the human voice. It uses this ability to elude pursuers, chiefly by using phrases such as “There he goes! That way!”

During days of the Old West, when cowboys gathered by the campfires singing at night, Jackanapes could often be heard mimicking their voices. It is said that a Jackalope may be caught by putting a flask of whiskey out at night. The Jackalope will drink its fill of whiskey and its intoxication will make it easier to hunt. In some parts of the United States it is said that Jackalope meat has a taste similar to lobster. However, legend has it that they are dangerous if approached. It has also been said that Jackanapes will only breed during electrical storms including hail, explaining its rarity.

The town of Douglas, Wyoming, has declared itself to be the Jackalope capital of America because, according to legend, the first Jackalope was spotted there around 1829. A large statue of a Jackalope stands in the town center, and every year the town plays host to Jackalope Day, usually held in June. Jackalope hunting licenses can be obtained from the Douglas Chamber of Commerce, though the hunting of Jackalopes is restricted to the hours of 12:00 am to 2:00 am on June 31. Now it is said that the most likely place to see a Jackalope is in Colorado.

According to the Douglas Chamber of Commerce, a 1930s hunting trip for jackrabbits led to the idea of a Jackalope. Herrick and his brother had studied taxidermy by mail order as teenagers. When the brothers returned from a hunting trip, Herrick tossed a jackrabbit carcass into the taxidermy store, where it came to rest beside a pair of deer antlers. The accidental combination of animal forms sparked Douglas Herrick’s idea for a Jackalope.

That first Jackalope was sold for $10 to Roy Ball, who installed it proudly in the town's Bonte Hotel. The mounted horned jackrabbit head was stolen in 1977.

Whether or not the Jackalope exists and roamed is up for debate but the stories of the Jackalope will go on and with it also carry on the legacy of the Old West, a time of when legends ran wild.

There is a photo of a possible Jackalope outside of Chugwater, Wyoming, on the side of a road. 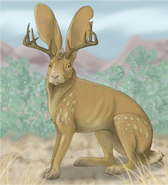 Artist’s Rendering of a Jackalope 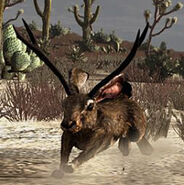 A Jackalope from Red Dead Redemption

Jackalope Hunting Permit. We here at the cryptid wiki advice to not kill possible endangered species.

If the Jackalope was its own species, by Hyrotrioskjan. 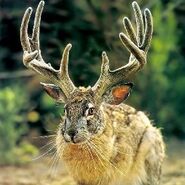 Jackalope- Well it isn’t actual monster, but still I wanted to try this pesky-nuisance out. Jackalopes were always thought to be some weird rabbit with antelope horns. They are actually small desert dwelling deer that are specialized to a nocturnal lifestyle and being underground some of the time. The sounds they make, though rare as they are a consistent of hisses and soups, when making a long distance call they will make a high-pitched howl. They convergently evolved large ears as a form of cooling system from the day heat, and to hear any approaching predators or disturbances of the desert. Once native to all the deserts of North America, now they are found only in Chihuahuan Desert, and are a critically endangered species because of hunters, climate change, shrinking food source (a rare kind of Mexican cactus) and habitat loss. 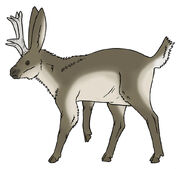