Made from the combined skeletons of several Basilosaurus possibly Pontogeneus, a type of prehistoric whale, Koch was enthralled to exhibit the "sea serpent" to the public in the Apollo Saloon for 25 cents. The 114-foot long skeleton could not have been a real sea serpent because the teeth were cetacean, which had double roots, in the corresponding double sockets. Some teeth were immature, some very old, which has never been heard of in fossilization. It was even thought by some to be the biblical "Leviathan". Koch proclaimed that he found the skeleton in Alabama.

Hydrarchos is not the only sea serpent proven to be a hoax. Lots of other sightings have also been debunked over the years, including the world's most famous proof of the Loch Ness Monster or "Nessie". 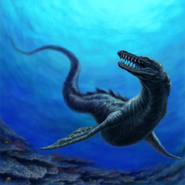