Cryptid Wiki
Register
Don't have an account?
Sign In
Advertisement
in: North America (Minus Mexico and Caribbean), Cryptids, Cryptid Wiki,
and 4 more

The Hugag (Rythmopes inarticulatus) is a Fearsome critter, recounted by the lumberjacks of North America during the 19th and early 20th Century. Said to be a huge animal of the LakeStates, Its range includes western Wisconsin, northern Minnesota, and a territory extending indefinitely northward in the Canadian wilds toward Hudson Bay. - The Hugag was first illustrated in the bestiary "Fearsome Creatures of the Lumberwoods, by William T. Cox," (1910)

to quote Cox's description: "In size the Hugag may be compared to the moose, and in form it somewhat resembles that animal. Very noticeable, however, are its jointless legs, which compel the animal to remain on its feet, its long upper lip, which prevents it from grazing. If it tried that method of feeding it would simply tramp its upper lip into the dirt. Its head and neck are leathery and hairless. Its strangely corrugated ears flop downward, its four-toed feet, long bushy tail, shaggy coat and general make-up give the beast an unmistakably prehistoric appearance. The Hugag has a perfect mania for traveling, and few hunters who have taken up its trail ever came up with the beast or back to camp. It is reported to keep going all day long, browsing on twigs, flopping its lip around trees, and stripping bark as occasion offers, and at night, since it cannot lie down, it leans against a tree, bracing its hind legs and marking time with its front ones."

"The most successful Hugag hunters have adopted the practice of notching trees so that they are almost ready to fall, and when the Hugag leans up against one both the tree and the animal come down. In its helpless condition, it is then easily dispatched. The last one killed, so far as known, was in Turtle River, northern Minnesota, where a young one, weighing 1,800 pounds, was found stuck in the mud. It was knocked in the head by Mike Flynn of Cass Lake."

The first mention of the hugag to refer as a myth among loggers, is found in "In the Limestone Valley: Pen Pictures of Early Days in Western Wisconsin by S.W. Brown." (1900) Albeit was spelled "hew-gag," the creature, as described by Brown, had round feet surrounded on all sides by claws to conceal its direction of travel. Apart from this, Brown does not offer much detail aside from that the "hew-gag" is not as "ferocious" as other woods beasts. - The Hugag also appears to be the name of a mine located at Republican Mountain, in Colorado, discovered in 1870.

In the 2015 horror inspired "Fearsome Creatures Of The Lumberwoods" by Hal Johnson. - The Hugag has antlers, a long pendulous lower lip that extends beyond its lower jaw, two tails, height as that of a giraffe and is covered in plant life, which is also the Hugag's method of camouflage. Its pine stench makes good air fresheners. The Hugag's eyes are vulnerable to getting weak from cataracts, and despite being a herbivore, will accidentally eat humans when it's weak-eyed. Its scientific name is Sinegenu coniferferus.

"The Hugag" from Fearsome Creatures of the Lumberwoods (1910) by William T. Cox 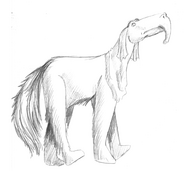 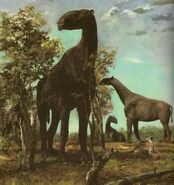 Could a survived group of Paraceratherium be the mysterious creature?

Or a living Moropus??
Community content is available under CC-BY-SA unless otherwise noted.
Advertisement