Cryptid Wiki
Register
Don't have an account?
Sign In
Advertisement
in: Cryptids, Cryptid Wiki, North America (Minus Mexico and Caribbean),
and 10 more

The Kelly–Hopkinsville encounter, also known as the Hopkinsville Goblins Case, and to a lesser extent the Kelly Green Men Case, is the name given to a series of connected incidents of alleged close encounters with presumably extraterrestrial beings.

The sightings supposedly inspired the movie E.T. and the Pokemon Sableye and possibly the Denziens from Call of Duty Black Ops 2 Zombies.

There were dozens of eyewitnesses to the incidents, which included two families present at the farmhouse and others in the area; other civilians, some of whom had no connection to the families at the farmhouse; and even one in another state. Perhaps most significantly the witnesses also included several local policemen and a state trooper who saw and heard strange phenomena such as unexplained lights in the night sky and noises the same night.

The seven people present in the farmhouse claimed that they were terrorized by an unknown number of creatures similar to gremlins, which have since often been referred to as the "Hopkinsville Goblins" in popular culture. The residents of the farmhouse described them as around three feet tall, with upright pointed ears, thin limbs (the beings legs were said to be almost non functional or devolved, even in a state of atrophy), long arms and claw-like hands or talons. The creatures were either silvery in color, or wearing something metallic. Their movements on occasion seemed to defy gravity with them floating above the ground and appearing in high up places, and they "walked" with a swaying motion as though wading through water. Although the creatures never entered the house, they would pop up at windows and at the doorway, waking up the children in the house to a hysterical frenzy. The families fled the farmhouse in the middle of the night to the local police station and sheriff Russell Greenwell noted they were visibly shaken. The families returned to the farmhouse with Sheriff Greenwell and twenty officers, yet the occurrences continued. Police saw evidence of the struggle and damage to the house, as well as seeing strange lights and hearing noises themselves. The witnesses additionally claimed to have used firearms to shoot at the creatures, with little or no effect, and the house and surrounding grounds were extensively damaged during the incident. There are no known photographs of a Hopkinsville Goblin. 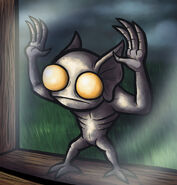 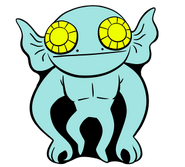 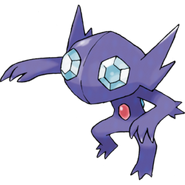 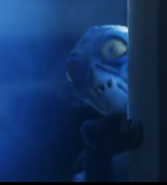