Start a Wiki
The Hoop Snake is a fearsome critter in a story told by lumberjacks living around Wisconsin, Minnesota, and parts of Canada. It was reputedly a colorful snake that moved itself by biting the back of its tail with its jaws, transforming its entire body into a "wheel" for quicker movement. The creature is highly venomous and leaves only a small chance for its victims to survive, the most popular way being to hide behind a tree to avoid the strike. It was first mentioned through a letter in 1784:

"As other serpents crawl upon their bellies, so can this; but he has another method of moving peculiar to his own species, which he always adopts when he is in eager pursuit of his prey; he throws himself into a circle, running rapidly around, advancing like a hoop, with his tail arising and pointed forward in the circle, by which he is always in the ready position of striking. It is observed that they only make use of this method in attacking; for when they flee from their enemy they go upon their bellies, like other serpents. From the above circumstance, peculiar to themselves, they have also derived the appellation of hoop snakes."

Its methods of getting its prey are similar to two other snake-like cryptids, the mythical fat snake tsuchinoko (attacks by rolling on its body sideways) from Japan, and the legendary ouroboros from Greece, suggesting a similarity. Also, the toxic poison is on a tip in the tail.

This could very well be a new species of snake. This snake could use this as a means to catch prey or escape, how it does this and keep its balance remains a mystery

"The Hoop Snake" from Fearsome Critters (1939) by Henry H. Tryon

The hoop snake chasing a man

Cartoon depiction of the hoop snake 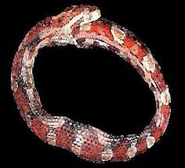 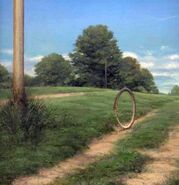 Add a photo to this gallery
Retrieved from "https://cryptidz.fandom.com/wiki/Hoop_Snake?oldid=105895"
Community content is available under CC-BY-SA unless otherwise noted.