Hogzilla is a giant pig who was shot and killed by a hunter named Chris Griffin in Alapaha, Georgia on Ken Holyoak's fish farm and hunting reserve. It was a male hybrid of a wild hog and domestic pig. Reported to be over 12 feet long and weighing over 1000 pounds it was originally considered a hoax. In March 2005, it was revealed that it was only 800 pounds and was between 6.9 and 8.6 feet long, but nevertheless, is still a monster subject. There is also another big pig known as Fred who was shot and killed by a 12 year old boy named Jamison Stone on a game reserve that according to hunters, weighed 1051 pounds and was 9.4 feet long. The true dimensions are disputed. The boy used a Smith and Wesson Model 500 50 caliber revolver and shot it 9 times before killing him with a headshot. Apparently, the reserve purchased him from a farm who was selling all of their pigs. The Coursey hog is a hog shot and killed by William Coursey in Fayetteville, Georgia that weighed over 1100 pounds. Hog Kong was a giant pig who weighed 1140 pounds when shot on a farm near Leesburg, Georgia. Big Bill was a pig who broke a leg in Jackson, Tennessee and was put down when he weighed 2552 pounds. He also holds the record for largest pig ever. Ton Pig was a hog from China that weighed 1984 pounds and died from lack of mobility because of obesity. Big Norm was a pig who grew to 1600 pounds and grew to 8 foot 4 inches. They are no longer considered a cryptid. On freedomarms.com, on the trophy board, a man named Robert Fanucci posted a picture of a wild boar that he took with his FA .500 Wyoming Express revolver.

In 2008, Fangoria productions made a movie titled Pig Hunt, where a group of hunters are being attacked and killed by a gigantic hogzilla with an unusual craving for human flesh. 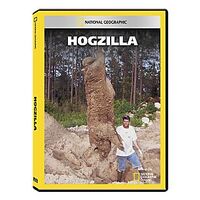 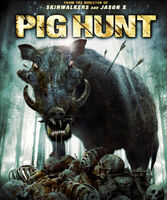 A movie poster for the film Pig Hunt