The Hodag (Nasobatilus hystrivoratus) is a folkloric animal of the American state of Wisconsin, referred to as a fearsome critter. Its history is focused mainly around the city of Rhinelander in northern Wisconsin, where it was said to have been discovered.

In 1893, newspapers reported the discovery of a Hodag in Rhinelander, Wisconsin. It had "the head of a frog, the grinning face of a giant elephant, thick short legs set off by huge claws, the back of a dinosaur, and a long tail with spears at the end". The reports were instigated by a well known Wisconsin timber cruiser and prankster Eugene Shepard, who rounded up a group of local people to capture the animal. The group reported that they needed to use dynamite to kill the beast.

A photograph of the remains of the charred beast was released to the media. It was "the fiercest, strangest, most frightening monster ever to set razor-sharp claws on the earth. It became extinct after its main food source, all white bulldogs, became scarce in the area."

Shepard claimed to have captured another Hodag in 1896, and this one was captured alive. According to Shepard's reports, he and several bear wrestlers placed chloroform on the end of a long pole, which they worked into the cave of the creature where it was overcome. He displayed this Hodag at the first Oneida County fair. Thousands of people came to see the Hodag at the fair or at Shepard's display in a shed at his house, where he charged 10 cents for admission. Having connected wires to it, Shepard would occasionally move the creature, which would typically send the already-skittish viewers fleeing the display. In addition, Shepard would often tell the curious customers that the Hodag was especially angry that day. In order to convince people that he was telling the truth, he would go into his shed, supposedly in an effort to calm the Hodag. While he was in the shed, Shepard would change into shredded clothing to make it look like he had been attacked. He would also have his two sons make a lot of noise behind the shed to make the attack sound more convincing.

As newspapers locally, statewide, and then nationally began picking up the story of the apparently remarkable, living creature, a small group of scientists from the Smithsonian Institution in Washington D.C. announced they would be traveling to Rhinelander to inspect the apparent discovery. Their announcement spelled the end of Shepard's gimmick, and he was then forced to admit that the Hodag was a hoax.

In the 2015 version of Fearsome Creatures, the Hodag is now a 3,000 pound carnivorous bull-horned rhinoceros with a spiny back and an antipathy for lemons. Its tears are gem-like. The animal is the master of the Michigan lumberwoods since the death of the giant lumberjack, Paul Bunyan. The Hodag has the highest fearsomeness level in the book: 12. The scientific name is Imperator rex.

"The Hodag" from Fearsome Creatures of the Lumberwoods (1910) by William T. Cox

Another view of the statue

Illustration of a pack of Hodags in the winter

The Hodag of Horror in Scooby-Doo! Mystery Incorporated 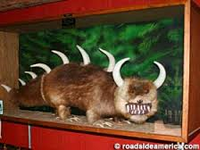 A close-up of the Hodag. 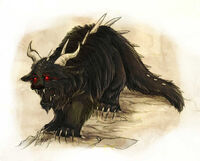 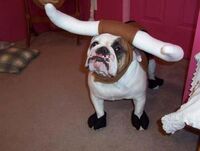 A postcard of a lone Hodag taking a brisk stroll through the woods.

Depiction of a Hodag by Kaijuverse
Русский
Community content is available under CC-BY-SA unless otherwise noted.
Advertisement