Cryptozoology (meaning "study of hidden animals") is the scientific search for animals whose existence has not been proven. This includes looking for living examples of animals that are considered extinct, such as dinosaurs; animals whose existence lacks physical evidence but which appear in myths, legends, or are reported, such as Bigfoot and Chupacabra; and wild animals dramatically outside their normal geographic ranges, such as phantom cats (also known as Alien Big Cats).

The animals cryptozoologists study are often referred to as cryptids, a term coined by John Wall in 1983. The study of cryptids has a long, complex history, spanning across several centuries until is became what it is today.

Historically known as "The first oceanographic cruise," Female Egyptian Pharaoh Hatshepsut built a Red Sea fleet to facilitate trade between the head of the Gulf of Aqaba and points south as far as Punt (uncharted regions of Africa) to bring mortuary goods to Karnak in exchange for Nubian gold.

Hatshepsut personally made the most famous ancient Egyptian expedition that sailed to Punt. During the reign of Queen Hatshepsut in the 15th century BC ships regularly crossed the Red Sea in order to obtain goods. The fleet brought back several ships full of animals that were undiscovered and recorded prior to that event. Amongst the animals were a long necked dragon, now known scientifically as a giraffe, parrots, and an African unicorn, recently discovered by cryptozoologists in the 1900s. 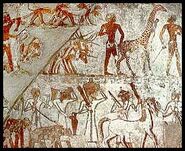 Animals from the Land of Punt

Valmiki wrote the Ramayana between the 4th and the 2nd centuries BC, documenting several legendary creatures and lifeforms that allegedly lived millions of years ago. Mainly it focuses Vanaras (Sanskrit: वानर), a group of monkey-like humanoids in the Indian epic Ramayana who were brave and inquisitive by nature. The term Vanara can be described as forest-dweller (vane carati iti vanara). The epic Mahabharata describes them as forest-dwelling. The Sanskrit/Pali epics of Southeast Asia mention several exotic creatures including ape-like humanoids. Some Indians see this as a proof of the historicity of their mythological characters and as support for the prehistoric hominids in their texts. The Ramayana speaks of the Vanaras, an ape-like species with human intelligence, that existed millions of years ago. However, according to the Ramayana alongside these ape-men existed in modern times. There are many versions, as the Ramayana spread to many Asian countries outside of India, including Thailand, Burma, Indonesia, Cambodia, Laos, Philippines, and China. Vanaras are widely considered the Asian Bigfoots.

The Natural History is written by Pliny the Elder (AD 23 – August 25, AD 79). During his journeys across East Africa and India, Pliny tells of giant grasshoppers that's jagged legs were used as saws and cynocephalus, dog headed mammals, along with Rhinos, man-cats (leopards), killing flies (tsetse flies), fire breathing basilisk, giant salmanders and numerous insects unknown and undiscovered by anyone in Rome or the ancient world. Not only was Pliny's first attempt at studying insects, but it was also amongst the earliest examples of cryptozoology and thinking beyond the known science. Pliny the Elder died on August 25, AD 79, while attempting the rescue by ship of a friend and his family from the eruption of Mount Vesuvius that had just destroyed the cities of Pompeii and Herculaneum. The prevailing wind would not allow his ship to leave the shore. His companions attributed his collapse and death to toxic fumes, but they were unaffected by the fumes, suggesting natural causes.

Conrad Gesner (26 March 1516 – 13 December 1565) was a Swiss naturalist and bibliographer. His five-volume Historiae animalium (1551–1558) is considered the beginning of modern zoology, and the flowering plant genus Gesneria and its family Gesneriaceae are named after him. A genus of moths is also named Gesneria after him. He is denoted by the author abbreviation Gesner when citing a botanical name. Historiae animalium ("Histories of the Animals") published at Zurich in 1551-58 and 1587, is an encyclopedic work of "an inventory of renaissance zoology" by Conrad Gesner, a doctor and professor at the Carolinum, the precursor of the University of Zurich. It is the first modern zoological work that attempts to describe all the animals known, and the first bibliography of natural history writings. The five volumes of natural history of animals consists of more than 4500 pages. It is the first book with fossil illustrations.

February 12th, 2009 marks the 200th birthday of Charles Robert Darwin, whose publication of The Origin of the Species first posited that all life evolved over time from one common ancestor.

But rather than dwell on the now centuries old debate between creationism and evolution, our friends over at Cryptomundo have chosen to commemorate the late, great naturalist’s life by illuminating Darwin’s own cryptozoological connection - specifically the Mylodon darwinii - an obscure, but nonetheless intriguing cryptid named in honor of Darwin. It’s a truly compelling tale, and we couldn’t imagine a better way to celebrate the good Captain of The HMS Beagle’s birthday.

Mylodon darwinii is a cryptid named after Charles Darwin. His biography is straightforward. His legacy is great. Two hundred years ago he was born. Amazingly, old Charlie was born the same day as Abraham Lincoln. It looks to be a busy few days, so I thought I’d get a headstart.

Charles Robert Darwin was born on February 12, 1809, and died on April 19, 1882. Darwin, of course, is remembered as the English naturalist who theorized, and first published in grand fashion, that all species of life have evolved over time from common ancestors through the process he called natural selection. You’d have to have lived under a rock to not have heard of On The Origin of the Species.

But, I am not about to talk of evolution, creationism, dinos in the Congo, or any of the hot-button topics so often associated with Darwin. 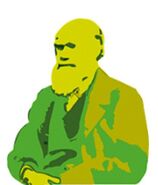 Stories of an ape like creature roaming the forests of North America have been around as long as some of the Native Americans tribes started in certain areas, due to the finding of cave painting of sasquatches. However, the earliest written account was made in 1811 by David Thompson, who was mapping regions of Canada and the United States of America during the time.

"(Spokanes) believe in a race of giants which inhabit a certain mountain off to the west of us."

Thompson spoke of the Spokanes, and local Native American tribe in Washington State. According to Thompson, the Spokanes told him of a race of hairy giants that lived in one of the nearby mountains (Possibly Mt. St. Hellons or the Cascade Mountains) that would steal salmon and people while they were asleep (similar to the Ostman story in 1924). This was also the first time a foot-print was mentioned for a Bigfoot. Thompson said that the "giants" left footprints one and a half feet long. David Thompson (April 30, 1770 – February 10, 1857) was a British-Canadian fur trader, surveyor, and map-maker, known to some native peoples as "Koo-Koo-Sint" or "the Stargazer". Over his career he mapped over 3.9 million square kilometers of North America and for this has been described as the "greatest land geographer who ever lived." In 1815, Thompson moved his family to Williamstown, Upper Canada and a few years later was employed to survey the newly established borders with the United States from Lake of the Woods to the Eastern Townships of Quebec, established by Treaty of Ghent after the War of 1812. In 1843 Thompson completed his atlas of the region from Hudson Bay to the Pacific Ocean.

Afterwards, Thompson returned to a life as a land owner, but soon financial misfortune would ruin him. By 1831 he was so deeply in debt he was forced to take up a position as a surveyor for the British American Land Company to provide for his family. His luck continued to worsen and he was forced to move in with his daughter and son-in-law in 1845. He began work on a manuscript chronicling his life exploring the continent, but this project was left unfinished when his sight failed him completely in 1851.

The Maltese tiger, or blue tiger, is a reported but unproven cryptid, reported mostly in the Fujian Province of China. Around 1910, Harry Caldwell, an American missionary and big game hunter, spotted and hunted a blue tiger outside Fuzhou. His search is chronicled in his book Blue Tiger (1924), and by his hunting companion Roy Chapman Andrews in his Camps & Trails in China (1925, chapter VII). Chapman cites Caldwell thus:

"The markings of the beast are strikingly beautiful. The ground colour is of a delicate shade of maltese, changing into light gray-blue on the underparts. The stripes are well defined and like those of the ordinary yellow tiger.'

The coining of the word cryptozoology is often attributed to Belgian-French zoologist Bernard Heuvelmans, though Heuvelmans attributes coinage of the term to the late Scottish explorer and adventurer Ivan T. Sanderson. Heuvelmans' 1955 book On the Track of Unknown Animals traces the scholarly origins of the discipline to Anthonie Cornelis Oudemans and his 1892 study, The Great Sea Serpent. Heuvelmans argued that cryptozoology should be undertaken with scientific rigor, but with an open-minded, interdisciplinary approach. He also stressed that attention should be given to local, urban and folkloric sources regarding such creatures, arguing that while often layered in unlikely and fantastic elements, folktales can have small grains of truth and important information regarding undiscovered organisms. Phantom cats (an example of living animals supposedly found outside of their normal range) are a common subject of cryptozoological interest, largely due to the relative likelihood of existence in comparison to fantastical cryptids lacking any evidence of existence, such as Mothman. 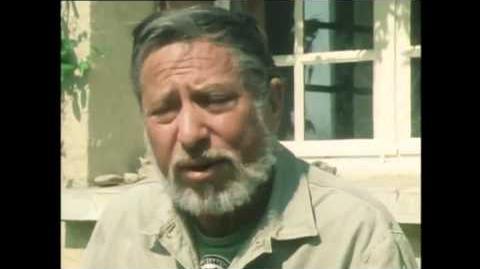 Karl Shuker (born 1959) is a British zoologist, cryptozoologist and author. He currently lives in Midlands, England, where he works as a zoological consultant and writer. A trained zoologist, Shuker is known for his contributions to the field of cryptozoology, bringing public attention to recently discovered or rediscovered species in the twentieth and twenty-first centuries, and for his published works in the discipline. A columnist in Fortean Times and contributor to various magazines, Shuker is also the editor-in-chief of the Journal of Cryptozoology, which began in November 2012. Another notable book on the subject is Willy Ley's Exotic Zoology (1959). Ley was best known for his writings on rocketry and related topics, but he was trained in paleontology, and wrote a number of books about animals. Ley's collection Exotic Zoology is of some interest to cryptozoology, as he discusses the Yeti and sea serpents, as well as relict dinosaurs. The book entertains the possibility that some legendary creatures (like the sirrush, the unicorn or the cyclops) might be based on actual animals, through misinterpretation of the animals and/or their remains. Also notable is the work of British zoologist and cryptozoologist Karl Shuker, who has published 12 books and countless articles on numerous cryptozoological subjects since the mid-1980s.

Loren Coleman (born July 12, 1947) is an author of books on a number of topics, including cryptozoology, who was born in 1947 in Norfolk, Virginia and grew up in Decatur, Illinois.

Craig Woolheater has written 1715 posts on Cryptomundo and the Co-founder, and active founder, of Cryptomundo in 2005. He has appeared in or contributed to the following TV programs, documentaries and films: OLN's Mysterious Encounters: "Caddo Critter", Southern Fried Bigfoot, Travel Channel's Weird Travels: "Bigfoot", History Channel's MonsterQuest: "Swamp Stalker", The Wild Man of the Navidad.

The future of Cryptozoology is you! We have the potential to make a tremendous difference and become the great

cryptologists of tomorrow. It is the younger generation that becomes the leaders of tomorrow. Wilma Rudolph once said "...Never underestimate the power of dreams and the influence of the human spirit. We are all the same in this notion: The potential for greatness lives within each of us." Founded in 2009, Cryptid wiki's aim was to nurture the passion of cryptozoology in "crypto-fans" to hopefully build cryptozoolgists of the future. Remember, all great cryptozoologists started out as "crypto-fans." Despite sometimes decreasing desired quality, Cryptid Wiki believes in allowing anyone to edit this site in hopes to build their individual potential and interest in cryptozoology.