Cryptid Wiki
Register
Don't have an account?
Sign In
Advertisement
in: Cryptids, Cryptid Wiki, North America (Minus Mexico and Caribbean),
and 5 more

The Hidebehind is a mysterious nocturnal creature from American folklore. It is said to prey upon humans that wander the woods at night, and was credited for the disappearances of early colonial loggers when they failed to return to camp. Early accounts describe Hidebehinds as large, powerful animals, despite the fact that no one was able to see them.

As its name suggests, the Hidebehind is noted for its ability to conceal itself. When an observer attempts to look directly at it, the creature hides again behind an object or the observer and therefore can't be directly seen. The Hidebehind uses this ability to stalk human prey without being observed and to attack without warning. Once the person is killed, the Hidebehind drags the person back to their lair to be eaten.

"The Hidebehind" from Fearsome Critters (1939) by Henry H. Tryon

The Hidebehind has appeared in a number of novels and stories. Some of these stories have revolved around other characters in American folklore.

An artistic sketch of a Hidebehind 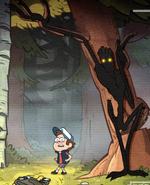 From Fantastic Beasts and Where to find them, a Harry Potter spin-off 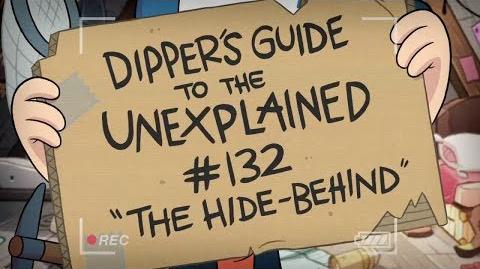 The Hide-Behind - Gravity Falls - Dipper's Guide to the Unexplained

go on 2:50 for a video of the hidebehind