The Hellhound is a supernatural canine, found in folklore. Sometimes known as black dogs a wide variety of ominous or hellish supernatural dogs occur in mythologies around the world, similar to the ubiquitous dragon. Features that have been attributed to Hellhounds include black fur, glowing red or sometimes glowing yellow eyes, super strength or speed, ghostly or phantom characteristics, foul odor, and sometimes even the ability to talk. There is a famous greek Hellhound named 'Cerberus.'

Legend says that if someone is to stare into its eyes three times or more, the person will definitely die. In cultures that associate the afterlife with fire, Hellhounds may have fire-based abilities and appearance. They are often assigned to guard the entrances to the world of the dead, such as graveyards and burial grounds, or undertake other duties related to the afterlife or the supernatural, such as hunting lost souls or guarding a supernatural treasure. In European legends, seeing a Hellhound or hearing it howl may be either an omen of death or even a cause of death.

Some supernatural dogs, such as the Welsh Cŵn Annwn, were actually believed to be benign. However, encountering them was still considered to be a sign of imminent death. Hellhounds do what Hades tells them to.

In Appalachia, however, a different breed of Hellhound is thought to roam, mostly in Kentucky. It is said to have blackish-blue fur, a mane running halfway down its back, and large paws that look strikingly similar to a black bear's front paws. It does not seem to have much relation to religion, but rather called the "Kentucky Hellhound" likely because it wreaks havoc on livestock.

Hellhounds appear as enemies in the Call of Duty games' Zombie Mode. According to the games' lore, Samantha Maxis's dog, Fluffy, was used in a teleportation experiment by Edward Richtofen, but the dog was "accidentally" turned into a hellhound. Fluffy was also pregnant, causing an infinite number of them. 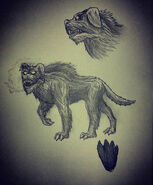