The Gulon, also known as Jerff in Nothern Sweden and Vielfraß in Germany, is a creature from Scandinavian mythology.

The Gulon is used as a symbol for gluttony as it stuffs more than it can fill. It is believed that it was first documented by Swedish historian Olaus Magnus. He described it as:

"... great as a great dog, and his ears and face are like a cat's, his feet and nails are very sharp, his body is hairy, with long brown hair, his tail is somewhat shorter, but his hair is thicker and of this they make brave winter caps. Wherefore this creature is the most voracious, for when it finds a carcass, he devours so much that his body, filled by so much meat, is stretched like a drum, and finding a strait passage between trees, he presseth between them, that he may discharge his body by violence, and thus being emptied, he returns to the carcass and fills himself top full."

The most likely explanation for the Gulon is that it as an exaggeration of the wolverine, as they both share some similar traits. 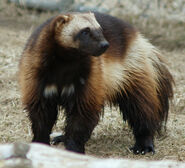 A wolverine, the most likely explanation