Gryttie is a mythical serpentine creature which is reputed to dwell in the depths of Gryttjen, in Hälsingland, Sweden. Gryttjen Lake is located fairly deep in the forest between the towns of Ljusdal and Hudiksvall. Gryttie is a local legend in the province of Hälsingland and unconfirmed sightings has been made at the lake since the 1800's but none were fully documented. The lake is stated to have a depth of about 118 feet but local attempts with sounding lines have found deep holes measuring over 300 feet down. The rumours of the lake monster was that it was some kind of sea serpent. However in 1985 a group calling themselves the Gryttie-group formed and started to make more systematic examinations of the lake including underwater cameras and side sonar scanning.

Their current theory today is that it is not a monster but actually some form of isolated population of seacow that actually lives in the lake but no conclusive evidence has been discovered of neither the existence of the monster nor of any animals that can explain the sightings. 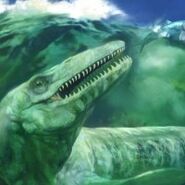