Cryptid Wiki
Register
Don't have an account?
Sign In
Advertisement
in: No Modern Sightings, Cryptid Wiki, Cryptids,
and 11 more

Grindylows are human-like beings with extended arms and long fingers. It lived in marshes and steep pools and devoured children that came to play in the lake. As soon as the child is unattended by an adult and goes near the edge of the pool, the Grindylow would drag them in.

Grindylow are folkloric creatures that originated from folktales in the English counties of Yorkshire and Lancashire. The name is thought to be connected to Grendel, a name most famously used in Beowulf but also found in many Old English charters where it is seen in connection with meres, bogs and lakes.

Grindylow are said to grab little children with their long sinewy arms and drown them if they come too close to the water's edge. Grindylow have been seen as a bogeyman used as a ploy to frighten children away from pools, marshes or ponds where they could drown.

Grindylow appear in the Harry Potter books and films where they live in the lake near Hogwarts. They appear as small, light green humanoid creatures with eight octopus like tentacles below the waist, large heads and big yellow eyes.

An unfriendly race called Grindylow appears in The Scar, a novel by China Miéville. They are described as humanoid with grey-green mottled skin, large dark eyes, foot-long teeth and a single eel-like tail below the waist. 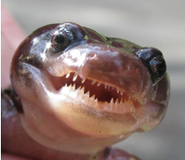