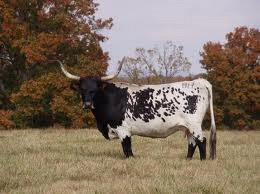 The Griggston Cow is a mysterious cow that is part of New Jersey folklore. It was reported to inhabit the Millstone River floodplain and the Griggstown Lock of the Delaware and Raritan Canal in Griggstown, in central New Jersey. It was originally thought to be an urban legend but in November 2002 was discovered to be a living black and white bull that had been roaming in an area where cattle are not normally found.

For thirty years there had been a legend of a "ghost cow" that wandered the areas around the Millstone River floodplain and Griggstown. The cow was seen many times but only on foggy nights or other times of poor visibility, and many tales were told by local hunters and hikers along the canal path. No spoor or tracks were ever found. Some fuzzy photographs were even taken, but they were all inconclusive. At the time the area was mostly suburban homes and open fields, and the canal was now a state park and walking trail so reports of a lone, owner-less, cow wandering a suburban park for decades were greeted with suspicion by local authorities. The cow became known as a sort of "Loch Ness Monster" of New Jersey and believed to be a myth, much like the Jersey Devil.

This changed on November 23, 2002 when a New Jersey Water Authority employee phoned the D&R canal park office and reported that he had not only seen the Griggstown Cow, but that it was lying in a ravine not far from the canal. Employees of Griggstown fire department, the State Park, and the New Jersey Fish and Wildlife service were dispatched, and to their surprise found a very old, weather-beaten bull that met the description of the "ghost cow".

The cow seemed mysterious because it was only spotted on days of poor visibility. Presumably the Griggstown Cow's failing eyesight is responsible for the few recorded sightings, it probably just couldn't see as well on foggy days and was less likely to notice encroaching humans before they spotted it.

The bull had fallen into the ditch and was either too old or too arthritic to get out. There had been no dairy farms in the area for decades, and no one had reported any missing livestock. The only answer was that this bull had been living in the floodplain all this time, since the days when this was a dairy farming area, foraging for food and avoiding human contact for three decades.

Thirty years ago this area of New Jersey had a burgeoning dairy industry. Obviously at least one cow escaped and went feral, leading a secretive life in the park's verdant woods. It is unknown whether the Griggstown Cow was the single cow responsible for all of the sightings, or if it was only the latest in a long line of feral cows.

Efforts were made to extract the bovine, and rescuers managed to hoist the bull onto level ground. Unfortunately, the animal was extremely weak. Video and photographs were taken. A local veterinarian determined he was in poor health and nothing could be done, and it was decided to euthanize the animal.

The "Ghost cow of Griggstown" was buried not far from the Griggstown lock, near his home and is still a part of New Jersey folklore.