Cryptid Wiki
Register
Don't have an account?
Sign In
Advertisement
in: Flying and Gliding, India, European cryptids,
and 17 more

The Brentford area of London is a peculiar place in terms of the names. You can buy an apartment at Griffin Flats, take in a football match at Brentford F.C‘s Griffin Stadium or have Steak and Ale Pie at the Griffin Arms Pub. To top that all off, there’s a chance you might bump into the Brentford Griffin, the mythological creature that, supposedly, flies and wanders around this London Borough.

Griffins were historically the legendary offspring of an eagle and a lion, with their purpose being to guard some hidden treasure.

The first well reported sightings of the creature began in 1984 when a pedestrian , fittingly walking past the Green Dragon Apartments, saw what he described as ‘a dog with wings’ flying through the sky. He claimed to have seen the creature a year afterwards, this time getting a better look, noticing rather large wings and a long muzzle. A handful of people travelling on a bus also claimed to have sighted the Griffin, sitting on a gasometer next to the local art centre.

The only other sighting in that spate was by a psychologist jogging near the Thames. The story made it to the 6 O’clock news, and phone lines were set up for people to report any sightings of the creature.

Yali, also known as Leogryph, are  mythical creatures seen in many Hindu temples, often sculpted onto the pillars. In its iconography and image the Leogryph has a catlike graceful body, but the head of a lion with tusks of an elephant (gaja) and tail of a serpent. Sometimes they have been shown standing on the back of a makara, another mythical creature. Some images look like three-dimensional representation of yalis. Images or icons have been found on the entrance walls of the temples, and the graceful mythical lion is believed to protect and guard the temples and ways leading to the temple. They usually have the stylized body of a lion and the head of some other beast, most often an elephant (gaja-vyala). Other common examples are: the lion-headed (simha-vyala), horse-(ashva-vyala), human-(nir-vyala) and the dog-headed (shvana-vyala) ones. While griffins are most common in the art and

lore of Ancient Greece, there is evidence of representations of griffins in Ancient Persian and Ancient Egyptian art as far back as 3,100 BC. Most statues have bird-like talons, although in some older illustrations griffins have a lion's forelimbs; they generally have a lion's hindquarters. Its eagle's head is conventionally given prominent ears; these are sometimes described as the lion's ears, but are often elongated (more like a horse's), and are sometimes feathered. The earliest depiction of griffins are the 15th century BC frescoes in the Throne Room of the Bronze Age Palace of Knossos, as restored by Sir Arthur Evans. It continued being a favored decorative theme in Archaic and Classical Greek art.

In Central Asia the griffin appears about a thousand years after Bronze Age Crete, in the 5th–4th centuries BC, probably originating from the Achaemenid Persian Empire. The Achaemenids considered the griffin "a protector from evil, witchcraft and secret slander". The modern generalist calls it the lion-griffin, as for example, Robin Lane Fox, in Alexander the Great, 1973:31 and notes p. 506, who remarks a lion-griffin attacking a stag in a pebble mosaic Dartmouth College expedition at Pella, perhaps as an emblem of the kingdom of Macedon or a personal one of Alexander's successor Antipater.

There have been no other sightings since the Benford Griffin, and the Legendary Griffin has drifted into local folklore. Other links between Brentford and the Griffin include the town’s old coat of arms, which includes a Griffin on either side of the crest. The fact that no one knows how the Griffin found its way into so many areas of local industry and history is one of the most baffling facts surrounding the legend. However, one story has surfaced to shed some light on its origins. Sir Joseph Banks, the eminent Botanist who accompanied Captain James Cook on his first Voyage of Discovery is alleged to have brought a Griffin back to England from a Pacific Island in the late 1770’s. Griffins have a lifespan that covers centuries, and many believe it is the very same Griffin that resides in Brentford to this day, revealing itself as it chooses.

Fossils of a dinosaur, Protoceratops, has been historically mistakenly for skeletons of griffons.

‎(1203–1283) was an Arabian and Persian physician, astronomer, geographer and proto-science fiction writer. He wrote the Marvels of Things Created and Miraculous Aspects of Things Existing. In it, he claims to has sighted a humanoid monkey, and recorded it in his book. 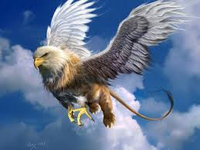 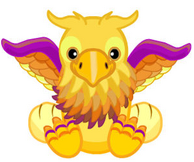 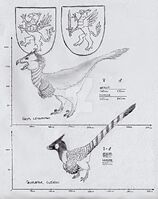 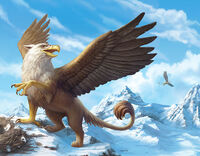 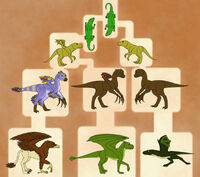 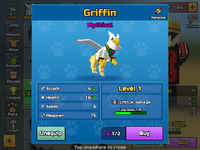 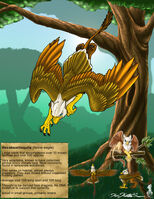 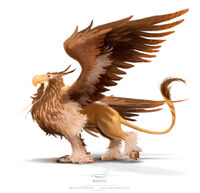 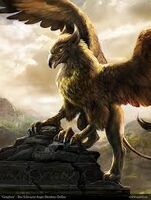 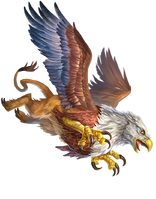 |-|Hippogriff = The Hippogriff is a mythical, Griffin-like creature, but part horse instead of a lion.

The Hippogriff has been a part of legends and myths since at least the 1600s Within the poem, the Hippogriff is a steed born of a mare and a griffin - It is extremely fast and is presented to be able to fly around the world and to the moon. This creature was supposed to live near Céret, in the County of Roussillon of modern-day France, during the Middle Ages. Claw marks were found on a rock near Mas Carol.

In a hoax initially perpetrated in 1904 in Lake George, New York State, tricksters used a fake “monster” which became known as "The Hippogriff". The creation had a head of a bird of prey, teeth, and two large horse ears, which could be controlled from below. The pranks and sightings faded until 1999 when several people staying at the Island Harbour House Hotel stated they had seen a sea monster at night. The old hoax was uncovered by the Daily News and the Lake George Historical Association Museum, which created a copy of the original wooden monster to display to the public in August 2002. some