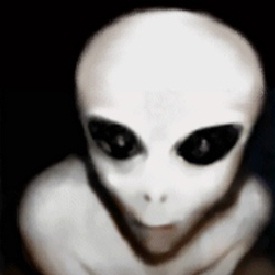 Grey Aliens, also referred as Greys and Grays are depicted to be dark to pale grey skinned humanoid aliens that have generally described with lack of external human organs such as noses, ears or reproductive organs. These beings are occasionally dubbed as Zeta Reticulans or Roswell Greys.

Their bodies are usually depicted as being long and lacking in muscle, their legs are shorter from what one would see in a human, their limbs are often depicted as being different from a human, with their humerus and thighs being the same length as their forearms and shins.

Grays are said to have oddly large heads compared to their bodies. They are also said to have completely no hair anywhere on the body, including the facial hair or any other type of hair, and no outer ears or noses, but only small openings for nostrils. They are said to have very large black eyes with no pupil. Also reports and abductions claim they are very small, but there are exceptions as some claim seeing large ones the size of a human or larger.

The Greys commonly abduct sleeping victims from their beds and take them away to strange, often horrifying places and experiment on them. These experiences are often (but unfortunately not always) forgotten by the victim when they wake up in their bed. Physical reminders are often left on their bodies, such as bruising, surgical incisions, punctures or mysterious triangular burns. These reminders are often times what turn the memory of a harmless nightmare into a cold, horrifying reality.

Some abductees have said their captors took them to a nightmarish place, wherein exist ungodly creatures detained in cells or brought up in nurseries, humans tortured in various ways behind every window and far more unspeakable things. The Greys then threaten such fates on their abductees unless they comply.

Grays are said to fly around in UFOs. They are said to have technology that is more advanced than us. They also show a disturbingly shocking resemblance to the Rake.

Grey Alien sightings make up over 40% of all reported alien encounters.

On July 8, 1947, in the town of Roswell, New Mexico, according to eyewitness and a press release by the Roswell Army Air Field a flying saucer had crashed in the desert. However they changed the story quickly to a crashed weather balloon. Eyewitness still say they found a crashed flying saucer and dead Grey Alien pilots in the craft. This would become one of the most famous UFO and Grey Alien cases.

Out of the wreckage, strange esoteric alien artifacts were supposedly discovered, described as "“I”-beam-like structures that were three-eights inch by one-quarter inch, none of them very long, that would neither bend nor break. Some of these “I”-beams had indecipherable characters along the length, in two colors.

Stranger yet, a young local mortician received a call from a hospital inquiring about hermetically sealed (airtight) coffins, and also about the hopes of preserving a body that had been exposed to the elements for a few days without contaminating bodily tissue. This young mortician, when returning to the base hospital, noticed strange bits of wreckage protruding from military ambulances. He was later ordered to leave by military personnel.

The "weather balloon" cover-up was supposedly thrown together at the last second. On the matter, Brig. Gen. Thomas DuBose, the chief of staff of the 8th Air Force, made this statement:

“[It] was a cover story. The whole balloon part of it. That was the part of the story we were told to give to the public and news and that was it.”

It is a subject of mystery what really crashed in Roswell that summer, but today the town of Roswell is a tourist destination with many alien-themed attractions.

One of the most famous abductions by Grays happened to Betty and Barney Hill September 19–20, 1961.

They saw a UFO on September 19, 1961, at around 10:30 p.m. The Hills were driving back to Portsmouth from a vacation in Niagara Falls and Montreal, Quebec, Canada. They later saw the UFO fly above them and even saw the pilots. The one pilot continued to look at Barney and communicating and telling him to "stay where you are and keep looking.". After they returned home they noticed strange things like that their watches had stopped. Barney noted that the leather strap for the binoculars was torn, though he could not recall it tearing. The toes of his best dress shoes were inexplicably scraped.

Once they returned home they mentioned how the drive should have been four hours but it took them seven hours. Betty had vivid dreams about the abduction. She said she had never had such odd dreams. This happened for 5 days. In a dream, she and Barney encountered men who surrounded their car. She lost consciousness. She then realized that she was being forced by two small human like creatures to walk in a forest in the nighttime, and seeing Barney walking behind her, she called to him, but he seemed to be in a trance or sleepwalking. The human-like creatures wore matching uniforms. They appeared like the normal description of a Grey Alien. Their skin was a grayish colour.

In the dreams she describes how she and Barney were taken into a metallic craft with the help of a ramp. Once Inside, she and Barney were separated, and she was told that if they are together, the experiments will take longer. As she entered the room two new aliens appeared. The examiner told Betty that it would conduct tests to see the differences between humans and the craft's occupants. It examined her, cut some of her hair, and saved some of her finger nails. After examining her legs and feet, it then used a dull knife, similar to a letter opener, to scrape some of her skin onto what resembled cellophane. He punctured her with needles to test her nervous system. Then it told them to continue their drive.

While under hypnosis, Betty's account was very similar to the events of her five dreams about the UFO abduction, but there were also a few differences. Her capture and release story was different. The technology on the craft was different. The short men had a significantly different physical appearance than the ones in her dreams. The order of the abduction event was also different from in Betty's dream account. She filled in many details that were not in her dreams and contradicted some of her dream content. It is interesting that Barney's and Betty's memories in hypnotic regression were consistent but contradicted some of the information in Betty's dreams. Betty exhibited considerable emotional distress during her capture and examination. Dr. Simon ended one session early because tears were flowing down her cheeks and she was in considerable agony.

There have also been reports of Grays using beam in their UFOs to paralyze them during abductions.

In 2011, a YouTuber by the name of ivan0135 uploaded 4 videos with Grey Aliens, that are said to have been filmed in 1961, the same date as the Betty And Barney Hill Abduction. At first, many people thought that the videos were a teaser for an upcoming television series or film, however that was disproven later on. The footage has been analyzed, and while there are many skeptics that doubt the videos are real, many agree that it would be pointless to take a lot of time, effort, and money to make no more than 4 videos and then disappear without a trace. Nobody has taken responsibility for creating the videos since the disappearance of Ivan0135. His disappearance could be attributed to the government locking him out of his account, or possibly kidnapping him or convincing him to stay quiet.

In the first video, a UFO can be seen flying in the air, before cutting to another clip where the same UFO can be seen crashed among multiple Grey Aliens, some dead, others alive. The individual(s) recording the footage is most likely a member of the government or military. The crash depicted in the video could be linked to the Roswell Incident.

The third video is Ivan0135 talking about the skeptics who doubt that the information presented in the footage is legit. Ivan says that "You are the ones who create your own misinformation".

In the fourth video, which is known as "Family Vacation", an incident is showed in which 3 Grey Aliens were filmed using a hidden device by a military member. It is said in the video that the "arrivals" had been filmed against "the treaty", and without their consent. The video also states that the treaty mentioned prevented anyone from recording or photographing meetings held between the Grey Aliens and US Government. It states that after the incident, the treaty was revised. This is the last video that was ever uploaded.

Some cases of Grey Alien abductions could be hallucinations or lucid dreams.

An interesting idea is that Grey Aliens are humans from the future that have evolved and traveled back in time to study the past.

Some theories claim that the Greys and the U.S Government are working together. In a trade-off, the Grey Aliens handed the U.S Government select technological blueprints in exchange for the amnesty to abduct human beings and conduct experiments on them. Some even go as far as to claim that there exists a top-secret base on Earth where the two work together on projects related to genetic-engineering and mutation, particularly on humans.

It is a leading theory that the Greys abduct and experiment on humans in an effort to keep the Grey species alive, since it is apparent that they have no reproductive organs. Many women claimed to have had their unborn children stolen from them and then presented to them after being infused with Grey DNA. These Grey/Human Hybrids look so much like us that we would never be able to spot the difference. These hybrids may even exist on Earth right now, co-inhabiting our streets and cities.

Do Grey Aliens see humans as their last hope of preserving their species? Or could it be that the Greys are just a curious bunch and enjoy experimenting on humans? It has even been proposed that humans are a food source for these interstellar travelers.

Do the UFO and alien believers know something that we don't?

Are we aliens ourselves?

It may be a long time before we know the true answer, but it does seem that we humans have something the Greys want, if they exist.

They have become the subject of memes on the Internet.

Some people report they have caught supposed "alien aircraft" on camera various times. Most turn out to be a hoax done by special effects or props.

Videos were made about an Alien Interview by MeniThings , and were sent into Billschannel. Bill Day and Robert Kiviat concluded that the video itself was fake, and the alien was computer generated. However, they also said that the messages presented in the video should be acknowledged. 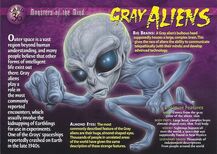 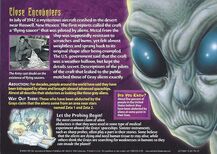 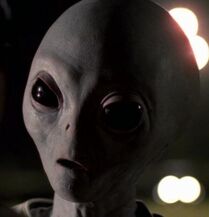 A Grey Alien from the popular show The X-Files 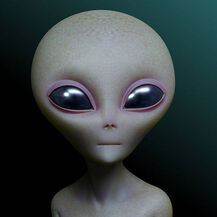 Artist's interpretation of an alien

A meme about Grey Aliens.

A screenshot from the popular american Television series, The X Files. 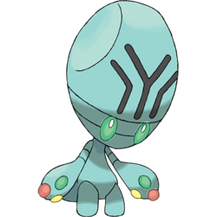 Elgeyem from Pokemon is based on these cryptids. 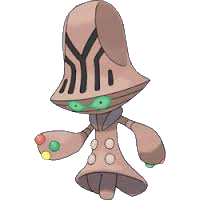 Beheeyem, Elgeyem's evolved form, is also based on these cryptids.

The Betty And Barney Hill Abduction