Gizotso is the name given in Basque to the Iberian Wolf Man. It is considered to be a monster of Basque mythology, half man and half Wolf. According to the legends, it live by the forest, appearing sometimes in the night, with chains. In the region of Luzaide (Navarre) it's believed that they possessed strength that is extraordinary.

In the region of Arratia, in Biscay, held as the product of the infamous trade between rational and irrational beings. The people says that in the place called Agiano (Zeanuri) lived a woman that was going to your House, but the Gizotso is ran with she and you ripped them breasts. 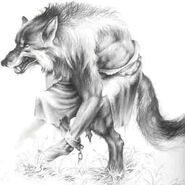