Many cryptozoologists have proposed that Bigfoot is a relict population of Gigantopithecus blacki. The view of Gigantopithecus was previously non-bipedal, however, as mentioned in BBC's Walking with Cavemen, the view of it as a bipedal ape is accepted by some scientists due to jawbone fossils. It was up to 12 ft tall on its hind legs and is estimated to weigh around 400 to 1400 lbs, and of course this is a perfect description of a living Sasquatch.

Gigantopithecus blacki is a popular explanation for the mystery apes known as Skunk Ape, Sasquatch or Bigfoot. This is commonly referred to as Giganto-Bigfoot Theory. Cryptozoologist Mark Hall, however, feels that Gigantopithecus is a good explanation for the True Giant sightings, rather than more traditional Bigfoot/Bigfoots/Bigfeet. To find the truth, there are many questions still left to answer about the giant primate.

Some cryptozoologists believe Gigantopithecus was a biped, a hypothesis most notably championed by the late Grover Krantz, but this assumption is based only on the very few jawbone remains found, all of which are U-shaped and widen towards the rear. This allows room for the windpipe to be within the jaw, allowing the skull to sit squarely upon a fully erect spine like modern humans, rather than roughly in front of it, like the other great apes.

There is one theory that was proposed by the anthropologist Grover Krantz that was made to support the idea that Gigantopithecus was primarily bipedal.‭ ‬Krantz noted how the known jaws of Gigantopithecus widen towards the rear and proposed that this widening occurred to allow for the housing of a trachea (‬the‭ ‘‬windpipe’ ‬that connects the lungs to the mouth opening) ‬when the skull was placed directly in top of the head like a human and not carried forward like a great ape.

The majority view is that the weight of such a large, heavy animal would put enormous stress on the creature's legs, ankles and feet if it walked bipedally; while if it walked on all four limbs, like gorillas, its weight would be better distributed over each limb. However, with an incomplete skeleton missing the pelvic and leg bones, researchers can only speculate what Gigantopithecus was like from analyzing primates living today. Until the skeleton is complete, we may never know the answer.

The Disappearance of Gigantopithecus

It is still unknown exactly what caused the Gigantopithecus, the largest ape to ever live, to disappear 100,000 years ago. This missing piece of information leaves many to wonder if maybe the beast still lives on today under the Bigfoot name. It has been suggested that the extinction of the ape can be attributed, like many other species in history, to man.

Evidence suggests that Gigantopithecus was hunted by early humans, however even scientists believe this was not the sole factor in the disappearance of Gigantopithecus, and also not a strong theory taking into account that Giangtopithecus and Homo erectus coexisted for a million years. Although, the species' predation at the hands of ancient man offers a popular explanation in Giganto-Bigfoot Theory. It is believed that, under the predation of primal man, the Gigantopithecus species adapted and perhaps began to follow an evolutionary path similar to that of its predators. According to this theory, the Gigantopithecus would eventually make its way to North America, albeit by now a little smaller, bipedal and decidedly more human in appearance through the process of convergent evolution, and would eventually become what we recognize today as Bigfoot.

However, it is extremely unlikely that the Gigantopithecus could have made its way to North America without such adaptations. The King Kong ape of Asia was more than likely doomed by its Brobdingnagian stature and inability to change its herbivorous diet in the rapidly changing world. G. Blacki was primarily a creature of the forest, but Southeast Asia was quickly losing its forests and becoming a dry savanna, unwelcoming of the colossal Gigantopithecus. Unable to find enough food to satiate their hunger, the largest apes to ever walk the Earth fell into extinction.

These theories are simply speculation, however, and there are many missing pieces to the puzzle that are left to find. Nobody can yet say for sure how Gigantopithecus disappeared from the face of the Earth.

In comparison to a human. 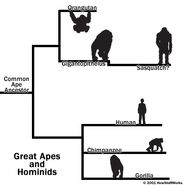