The Giant of Kandahar was an enormous humanoid creature allegedly encountered and killed by a group of American soldiers on a mountainside in Afghanistan.

Steven Quayle spoke of an occurrence which is still classified by the US Government in his popular Radio Show “Coast to Coast:” The events allegedly happened in 2002 in a desert part of Afghanistan, when a U.S. Army squad went missing. A "special ops task force" (branch unknown, possibly Rangers considering that the missing squad was Army) was sent to find out what had happened, and the soldiers walked along a ragged, mountainous trail until arriving at the entrance of a large cave. Pieces of broken U.S. military equipment and gear were scattered all around the clearing. The task force was about to enter the cave to explore its recesses when a ~12-15 feet, red-headed, six-digit, double-toothed humanoid emerged and attacked the soldiers. The giant impaled ‘Dan’ with giant spear and proceeded to attack the rest of the squad. The witness states that it took 30 seconds of continuous fire to down the giant.

Between them, the squad was armed with full-auto M4 carbines, "recon carbines" (semi-automatic) and M107 Barrett anti-materiel rifles firing .50 BMG. This much firepower concentrated on one target for one second, let alone thirty, would be extremely destructive.

According to the witness, the giant wore canvas or animal hide covers on to protect its feet like moccasins and smelt like dead bodies. The creature’s body was airlifted back to the squad’s base by a helicopter and net. From there it was loaded into an aircraft and taken away, never to be seen again.

Upon their return, the soldiers were made to sign non-disclosure paperwork to stop the word spreading of their encounter. The witness states that he broke his silence because “people have the right to know what’s happening on our planet”.

The Giant of Kandahar is a hoax, as the Department of Defense has no record of this incident. L.A. Marzulli, an author, blogger and filmmaker, is believed to have created or heavily influenced this legend. 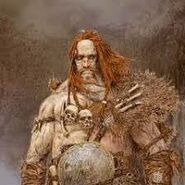