Giant Triops are mysterious creatures whose photos surfaced on several Russian websites in 2008.

The story accompanying them was:

"Look what they have found in Chelyabinsk city. The story is that there was a construction site with a deep foundation ditch. They have touched some underground river in the place, so the water in the ditch didn’t go away. It stayed there full of water. Then, some workers a few months later spotted some movement in this water. They threw some pieces of their lunch in the trench, which caused big activity inside. They were puzzled. Who is there?

And then they caught one of the creatures. In a panic, the workers stepped away because it tried to bite them. They had to kill it with some equipment, and here are the remains of it. It was around 5 feet long. Not one of them had any idea of what it was."

It is possible that a triop may have been exposed to radiation, but they are not native to that area. Most say it could be a horseshoe crab. However, the photos clearly show a triop of enormous size. Some say that from the detail of the concrete, the creature is actually 5 inches long, which is still quite large for a triop. 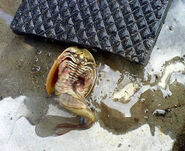