The Giant Jellyfish, locally known as Nomura's Jellyfish, was sighted only a few times in the past couple of years but has struck people with awe for decades.

In 1953, an Australian diver reportedly witnessed an enormous brown mass engulf a shark.

In 1969, divers Richard Winer and Pat Boatwright saw a jellyfish 50-100 feet in diameter. They said it was deep purple with a pink rim. They encountered this invertebrate southwest of the Bermuda.

Another sighting occurred in 1973 where a ship known as the Kuranda collided with one such jellyfish. Although it was removed using a hose it had stung one of the sailors who died from his wounds. An examination of the slime it left on the ship proved it was a Lion's Mane Jellyfish, which is massive, but not nearly as big as the supposed cryptid giant jellyfish.

There have been reports of jellyfish bigger than people in Japan. A young man once called the police because he said a jellyfish the size of a car ate his family when he was swimming in shallow ocean waters. He was put in jail for murder because the cops thought he was just lying to avoid getting caught for the crime that he may have committed. Then when he was released from jail, a polygraph test performed on him showed he did not seem to be lying. It is highly likely he bluffed the test or simply did not kill his family, but some speculate he actually saw a huge, new species of jellyfish capable of eating humans.

There are possibly larger and more dangerous jellyfish elsewhere. It has been said that due to global warming, jellyfish species are rapidly growing - but it may be that some of these species are growing in size rather than number.

Another explanation could be a Lion's Mane that grew to gargantuan sizes. The biggest lion’s mane jellyfish ever recorded to this date was discovered on the shores of Massachusetts Bay in 1870, it’s body measured at a diameter of 7 feet 6 inches (2.29 m) and tentacles 160 feet (46m) long, which is longer than a blue whale, the world's largest known animal.

However, these jellies tend to be long rather than wide, so the reports could be of long jellyfish instead of wide jellyfish. It could be a new species of jellyfish with a genetic structure that allows it to grow to massive sizes. 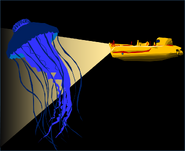 An artist's depiction of a sighting

Giant Jellyfish on the show MonsterQuest.

A Lion's Mane Jellyfish with a diver.