Cryptid Wiki
Register
Don't have an account?
Sign In
Advertisement
in: Cryptid Wiki, Cryptids, Reptiles and Amphibians,
and 5 more

The Giant Indian Bipedal Lizard is a unique agamid sighted by M. A. Smith in 1941.

Fan-throated lizards (Sitana ponticeriana) are one of the Indian Subcontinent’s most widespread and charismatic lizards, found in many of the region’s drier, scrubbier habitats. Not surprisingly, lizards across this vast range vary dramatically, most strikingly in the size and coloration of the throat-fans for which they’re named.

When disturbed, this lizard runs with a bipedal gait.

A larger variation of Sitana ponticeriana was reported to inhabit Salsette Island (formerly known as the seven islands of Bombay before land reclamation projects).

This cryptid's unusual size is believed to be a result of island gigantism.

This is agame brown, with dark spots on the body, and a clear band on each side of the body. It has a highly developed fan, with colors ranging from blue, black and red. The legs are thin, rather short at the front, with long fingers provided with claws. When it runs, it uses bipedalism.

In 1941, while Smith M. A. 1941 was gathering data for The Fauna of British India: Reptilia and Amphibia, he recorded two variations of the species.

M. A. Smith notes that there are two size variants with intermediates :

The larger lizard sighted by Smith may possibly represent Jerdon's deccanensis (Cyrtodactylus deccanensis), a large gecko native to the region.

This cryptid, along with the Moa, Haast's eagle, and the Komodo dragon are believed to be the result of island gigantism, or a biological phenomenon in which the size of animals isolated on an island increases dramatically in comparison to their mainland relatives. Island gigantism is one aspect of the more general "island rule", which posits that when mainland animals colonize islands, small species tend to evolve larger bodies, and large species tend to evolve smaller bodies. 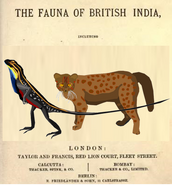