Note: While it is quite obvious this animal already exists. This page identifies possibly larger specimens. Giant catfish are catfish that grow 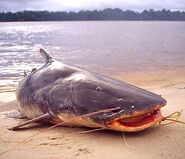 A Sareng (Wallago Attu) Catfish
Add a photo to this gallery
Retrieved from "https://cryptidz.fandom.com/wiki/Giant_Catfish?oldid=35294"
Community content is available under CC-BY-SA unless otherwise noted.