In Scottish Folklore, the Ghillie Dhu or Gille Dubh is a Nymph, a protector or guardian of the forests. He is kind to children, and sometimes will even comfort and direct lost humans to safety. However, he can be aggressive to anyone who enters its territory. Said to be dark haired, he is described as cloaked in leaves and moss (similar to a Green Man in England and Wales). He prefers the birch tree to all other trees, and is most active at night. In lore, this solitary spirit is said to reside primarily near Gairloch and Loch a Druing. He won't eat meat, so his diet consists of berries and nuts.

Other stories indicate that Ghillie Dhu could actually be an aggressive being that especially dislikes humans. If you were to walk in the forest at night, the Ghillie Dhu would wrap its long arms around you, squeeze you, and imprison you forever. Others say it simply crushes you into compost to help the forest grow. Yet another version of Ghillie Dhu says that they could actually be tooth fairies. That way, they could take care of children, and still not be noticed.

It is also a term used in song, including "code-songs" in which it was used to symbolize the Stuart heir, probably deriving from the time when the future Charles II, son of the executed Charles I, was in exile following the English Civil War. Charles was dark-hued, with black hair, and so was given the code-name "Gille Dubh." The term was later extended to mean his younger brother, ( James VII and II), after he was exiled following the rebellion that put his daughter Mary and her husband William of Orange on the throne.

Ghillie Dhu is the name giver for the "ghillie suit". The "Ghillie Suit" is worn by a sniper as camouflage, during a military operation. 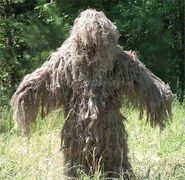