The Garson Invaders sighting was an extraterrestrial sighting that took place on July 2, 1954, at about 5:00 PM. 23 year-old Canadian miner named Ennio La Sarza (originally Italian) spotted three of the aliens, reporting them as more than just hostile, but more "outright apocalyptic" as Sarza accounted them as. Not only that, Ennio had absolutely no interest in science fiction, particularly "flying saucers" and very likely "little green men" in his opinion.

That is... until he spotted the Garson Invaders.

The saucer was spherical in shape, about 25-feet in diameter, and had a set of portholes around the edge of it. There were pieces of landing gear and something like a retractable antenna on top.”

The entities that emerged from the craft were described as colossal entities, 13 feet in height, with bluish-green skin and faces of a color he had never seen before. Their bodies seemed to glow, and they had a single eye in the center of what passed for a forehead. The beings had six evenly distributed sets of arms. The hands were equipped with crab-like claws, which opened and closed spasmodically. They also were equipped with a natural, twin antenna in the head. 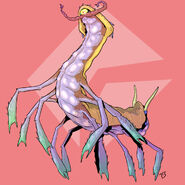