The Flatwoods Monster (also known as the Braxton County Monster, Braxxie (by locals), or Frametown Monster) is a cryptid sighted in the forests of Flatwoods, West Virginia and Frametown, West Virginia, respectively. It is believed to be of extraterrestrial nature.

The entity was initially reported as being about 10 feet tall and 4 feet wide. It appeared to be some sort of robotic suit or spacecraft rather than an organic being. It had a 'cowl' in the shape of an ace of spades behind a red round head. Set in the head were two eyes, described as 'portholes', glowing green-orange and the size of half-dollars.The 'body' was a metallic armored structure lined with thick vertical pipes. Discrepancies exist in the actual color of the armour, some claiming it to be black while others saying green. The existence of arms is a similar matter. Most state the monster was armless, while others claim it possessed small, "toy-like" arms.

The Frametown Monster, believed to be the same creature from Flatwoods, bore similar pipe-lined metallic armour from the waist down. From the waist up, however, the other being a reptilian humanoid.

At 7:15 PM on September 12, 1952, three little boys witnessed a bright object cross the sky. The object came to rest on land belonging to a local farmer. Once they saw the thing land, the boys went to one of their moms houses, where they reported seeing a UFO crash land in the hills. From there, the boys and a group of locals went to the farm to try to find whatever it was that the boys had seen.

One of the locals dog ran ahead out of sight and started barking, and moments later ran back to the group with its tail between its legs. After traveling about ¼ of a mile the group reached the top of a hill, where they reportedly saw a large pulsating "ball of fire" about 50 feet away. They also saw (and smelled) a mist that made their eyes and noses burn. A farmer then noticed two small lights over to the left of the object, and directed his flashlight towards them, revealing the creature, which was reported to have emitted a shrill hissing noise before gliding towards them, changing direction and then heading off towards the red light. At this point the group fled in panic.

Upon returning home, the mother contacted the local sheriff and a news reporter. The reporter conducted a number of interviews and returned to the site with the farmer later that night, where he reported that "there was a sickening, burnt, metallic odor still prevailing". The sheriff and his deputy searched the area separately, but found no trace of the encounter.

Early the next morning, the reporter visited the site of the encounter for a second time and discovered two tracks in the mud, as well as traces of a thick black liquid. He immediately reported them as being possible signs of a saucer landing based on the premise that the area had not been subjected to traffic for at least a year. It was later revealed that the tracks were likely to have been those of a Chevrolet pickup truck driven by a local, who had gone to the site to look for the creature some hours prior to Stewert's discovery.

After the event, investigators associated with Civilian Saucer Investigation, obtained a number of accounts from witnesses who claimed to have experienced a similar or related phenomena. These accounts included the story of a mother and her 21 year-old-daughter, who claimed to have encountered a creature with the same appearance and odor a week prior to the September 12 incident; the encounter reportedly affected the daughter so badly that she was confined to a hospital for three weeks. They also gathered a statement from the mother of the local farmer, in which she said that, at the approximate time of the crash, her house had been violently shaken and her radio had cut out for 45 minutes, and a report from the director of the local Board of Education in which he claimed to have seen a flying saucer taking off at 6:30 on the morning of September 13th (the morning after the creature was sighted).

The day after the Flatwoods incident, a couple taking a leisurely drive through the mountains of Frametown, West Virginia, at dusk were met with a similarly horrific experience. Their car came to a sudden stop and refused to start again. Shortly thereafter, a putrid sulfuric odor filled the air. The couple, circling the vehicle in hopes of spotting the culprit, spotted something far worse than they could have imagined. From the waist down it was similar to the Flatwoods Monster, but from the waist up was a reptilian humanoid. This creature, thought to be the same creature sighted in Flatwoods, is known as the Frametown Monster.

The Flatwoods design is popular in Japanese UFO culture, having been used in numerous video games and media. Notable examples include:

Painting based on the witness' descriptions 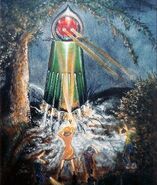 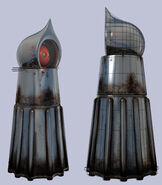 3D model of the Flatwoods Monster

Profile of the Frametown Monster

The Flatwoods Monster from The Legend Of Zelda Majora's Mask

More Cryptids by your boi

The Flatwoods Monster in Fallout 76 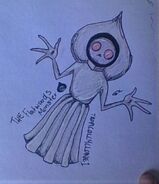 The Flatwoods Monster Drawn by Tropicalcyclone1 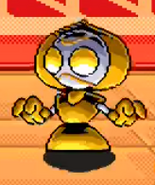 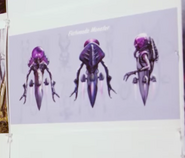