The Fern Flower is a magic flower in Slavic and Baltic mythology.

According to myth, the fern flower blooms for a short time on the eve of the Summer Solstice. It is said to bloom around midnight and would die before dawn. It shines with a golden, purple or blue glow. The flower is said to bring fortune, wealth, power or the ability to understand animal speech. It is guarded closely by evil spirits, such as witches and demons, who are particularly active during the nights of the Solstice.

People who searched for the flower had to be careful and would decorate themselves with mugwort. The flower shouldn't be picked and instead would need to be delicately shaken down from the fern. The flower would then be wrapped up in linen cloth. It was forbidden to look back when carrying it home and in some versions, the wealth from the flower couldn't be shared with anyone else.

Ferns are not flowering plants but there are flowering plants that resemble ferns, with some of these flowers opening during night time. However, some true ferns have sporangia in tight clusters (known as "fertile fronds") which may appear as flower-like clusters. These ferns are commonly known as "flowering ferns".

A flowering plant that resembles a fern 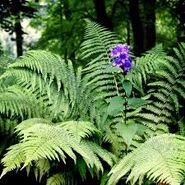 Another flowering plant resembling a fern