The Feiyi (肥遺) is a snake-like creature in Chinese Mythology. It is one of the mythical beasts featured in the Chinese classic text Classic of Mountains and Seas (山海经).

According to the Classic of Mountains and Seas, the Feiyi lives on Hunxishan (渾夕山) mountain. According to legend, the Hunxishan mountain has no flowers or trees but is rich in copper and jade. The Feiyi is described to be a snake with one head but two bodies. Sometimes it is said to have six legs and four wings. In other legends, the Feiyi is a name given to a yellow quail sized bird with a red beak. In all legends, it is a symbol of draught and eating it is said to cure diseases and prevent parasites. 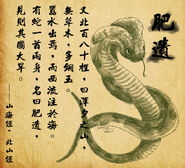 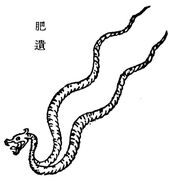 Feiyi depicted as a bird