The Ennedi tiger, Ennedi mountain tiger, or tigre des montagnes (French: "tiger of the mountains" or "mountain tiger") is a cryptid, purportedly a living sabre-toothed cat, reported from the Ennedi Plateau, Tibesti Mountains, and Guéra Massif in Chad; the Bongo Massif in the Central African Republic; and possibly the Imatong Mountains in South Sudan and Uganda. Native names for the animal include biscoro, coq-djingé, gassingrâm, hadjel, nisi or noso, and vassoko.

According to various tribes of Chad and the Central African Republic, the animals are usually described as cats larger than a lion, with reddish fur and often vertical white stripes. All are said to have very long teeth protruding beyond their lips, and either very short tails or no tails at all. The gassingrâm and vassoko are both described as having very powerful eyeshine, and the hadjel is said to be maned. The Yulu people describe a melanistic variety. They are mostly alleged to be nocturnal, and are supposed to be strong enough to carry very heavy prey; the vassoko in particular allegedly carries its prey hoisted on its back. However, Hadjerai folklore has it that the hadjel is a harmless animal which can only take small prey, as the great size of its teeth is supposed to cause it pain whenever it opens its mouth. Folklore of the Vakaga region also claims that the vassoko is followed by clouds of butterflies.

In 1937, French naturalist Lucien Blancou was told by a chief of Ouanda Djallé that a gassingrâm was haunting the district, carrying its prey off to caves in the mountains. Later, in 1960, two locals of Birao, 130 kilometres to the north, told H. R. Maudry that they had seen a vassoko at different times. Hadjerai people of Guéra also mentioned seeing hadjels to ethnologist Jeanne-Françoise Vincent. In 1969, big game hunter Christian Le Noël heard the bellowing of what his frightened tracker claimed was a mountain tiger emanating from a deep cavern in Chad, and was later told by his Yulu guide that in about 1940, a mountain tiger had carried off a horse antelope (Hippotraginae family) shot by him and his father.

When Christian Le Noël showed colour drawings of tigers, ocelots, cheetahs, snow leopards, cougars, and Smilodon to his Yulu trackers, they immediately selected the image of Smilodon as "their" mountain tiger. Smilodon was not found in Africa, but a number of other sabre-toothed cats such as Megantereon and Machairodus were. In his study of the case, Bernard Heuvelmans theorised that one of these sabre-toothed cat species might have taken up a life in the mountains and caves in order to avoid scavengers, particularly as, so he believed, its long fangs would make it a slow eater. Heuvelmans thought that such an animal would fill the niche of something like a bear.

The last known African lions in the Sahara also survived in these areas until they apparently became extinct before the mid-1900s (the last lion here was reported in 1940).

Illustration of the Ennedi tiger by an unknown artist. 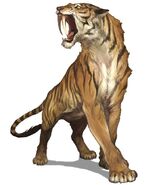 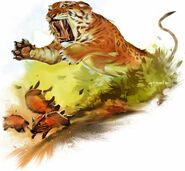 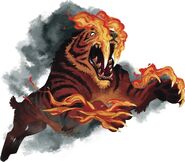 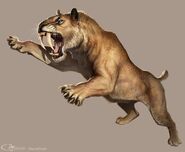 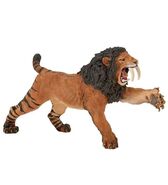 Long-fanged, sabre-toothed cat like animals which are said to live aquatic lives in rivers and swamps are also reported from Central Africa, but are considered entirely separate cryptids by most cryptozoologists.

The map is automatically displayed in labelled mode: for a better experience, it is advisable to press "Satellite" and enter satellite mode. Click on a marker for more details on a sighting. Please note that the majority of the sighting locations are not absolutely precise, unless otherwise mentioned.