Alien, demon or genetic mutation — the “Enfield Horror” (encountered in Enfield, Illinois) is one of the absolute strangest creatures ever to be chronicled in cryptozoological lore.

The bizarre string of events that would eventually stir the small Illinois town of Enfield into a frenzy of fear, began on the chilly night of April 25, 1973, when a young boy named Greg Garrett claimed to have been attacked by a truly bizarre beast while playing in his backyard.

The child described the being as having no less than three legs, grayish, slimy skin, short claws and reddish eyes. The creature apparently “stamped” on the boys feet with its own three — apparently clawed — foot-like appendages, tearing his tennis shoes to shreds. Greg, crying hysterically, wasted no time scurrying away from the fiend and back into the relative safety of his parent’s house.

Although young Greg’s encounter was technically the first on record, the one that brought this creature to notoriety came just a half hour later when the Garret’s neighbor, one Henry McDaniel and his family, had their own face-to-face encounter with this unbelievable entity.

At about 9:30 in the evening, the McDaniels returned home to find two of their children, Henry Jr. and Lil, in a terrified stupor. The children claimed that a “thing” had tried to break into the house through the door and a window mounted air conditioner, while their parents were gone. It was then that they all heard a “scratching” sound at the front door.

Assuming that it was some sort of stray animal, a skeptical Henry McDaniel cavalierly approached the door and yanked it open. What he saw before him would have shaken even the most courageous man to the core.

There, standing on his stoop, was the same red-eyed monstrosity that had terrified his own children and assailed the Garret child less than an hour before. McDaniel backed away from the entity in horror, slammed the door, stumbled to the nearby closet and retrieved a flashlight and his .22 pistol.

While his horrified family waited, Henry returned to the door and — with the conviction of a man dead set on defending his family and home — threw it back open, revealing that his first vision of this unbelievable beast had not been an hallucination. Later, McDaniel described the creature to the police:

“It had three legs on it, a short body, two little short arms coming out of its breast area and two pink eyes as big as flashlights. It stood four and a half feet tall and was grayish-colored… it was trying to get into the house!”

McDaniel’s opened fire on the creature, hitting it immediately, but instead of falling to the ground wounded or dead, the horrible thing merely “hissed like a wildcat” at the frightened homeowner. Henry, who had fired four shots at the thing, assured anyone who asked that he had not missed his quarry:

“When I fired that first shot, I know I hit it.”

Then, as unbelievable as it may seem, McDaniel claimed that the zoological oddity then tore off into the night, covering an area of approximately 50-feet in a series of just three astonishing leaps, before disappearing into the brush along the L&N railroad embankment in front of his house.

McDaniel’s promptly called the local authorities, but when Illinois state troopers who responded to the call arrived at the scene, the only evidence of the encounter that remained were a series of scratches in the siding of the McDaniel’s home and dog-like prints in the yard. What made the prints so unusual was the fact that they had six toe pads and, even more intriguingly, that they represented a three footed “animal,” with one track being slightly smaller than the others.

If McDaniel believed that his encounters with the unknown were a thing of the past, he would soon realize that he was sadly mistaken, when, on the eve of May 6, he was startled awake in the dead of the night by the howling of some neighborhood dogs. McDaniel pulled himself out of bed, once again claimed his firearm, and — with what must have been great trepidation — opened his front door.

This time his encounter with this creature would not be so intimate. He claims he watched the thing at some distance, languidly negotiating the trestles of the railroad tracks near his home:

As is always the case with astounding events such as this, it wasn’t long before the press got wind of the weirdness and came out in full force, but it wasn’t until McDaniel’s second report that the media frenzy truly kicked into overdrive.

White County Sheriff, Roy Poshard Jr., was so perturbed by this sudden influx of press and curiosity seekers (not to mention the alarm that was settling in on the locals) he threatened to incarcerate McDaniel if he didn’t stop inciting panic by spreading his wildly terrifying tale.

To make matters worse, well armed posses of amateur “monster” hunters began patrolling the area near the L&N railroad track sightings. It was on one such expedition that five young men allegedly had a run in with a creature identical to the one that Garret and McDaniel encountered — with the notable addition being that they described the thing as being “hairy.”

The men discovered the beast hiding in the underbrush and proceeded to open fire on it, but (much like in the McDaniel case) their bullets were unable to cause mortal injury and the monster bolted off at a speed that the eyewitnesses surmised was greatly in excess of any that a human being could achieve.

The final eyewitness to this improbable creature was Rick Rainbow, the news director of radio station WWKI in Kokomo, Indiana. He and three other unnamed individuals claimed to have seen a gray, stooping, 5-foot tall entity lurking outside an abandoned house not far from the Garret and McDaniel’s homes.

Although they did not have nearly as close (or for that matter as harrowing) an encounter as the previous sets of witnesses, Rainbow and his crew did manage to do one thing the others had not — tape record the monster’s disturbing scream.

It was then that noted cryptozoologist, Loren Coleman, arrived on the scene to investigate the eyewitnesses claims as well as the sound recording. Coleman also heard the haunting cry of the creature while searching an area where eyewitnesses claimed to have seen the thing:

“I traveled to Enfield, interviewed the witnesses, looked at the siding of the house the Enfield Monster had damaged, heard some strange screeching banshee-like sounds, and walked away bewildered.”

In the July, 1974 edition of Fate Magazine, Loren Coleman and Jerome Clark featured the Enfield Horror in an article entitled: “Swamp Slobs Invade Illinois.” Coleman even chronicled discussing this intriguing case with famed paranormal investigator as well as bestselling author of The Mothman Prophecies John A. Keel, in his book Mothman and Other Curious Encounters.

“This reminds me of my exchange with Keel… in 1973, when we were discussing the new reports out of Illinois, from Enfield. On April 25, 1973, Mr. and Mrs. Henry McDaniel returned to their home and Henry had an encounter with a thing that looked like it had three legs, two pink eyes as big as flashlights, and short arms on a four-and-a-half-feet tall and grayish-colored body, along the L&N rail-road tracks, in front of his house.”

Years later, Coleman would contrast his Enfield investigation with another he conducted regarding a legendary creature that many assume was also from alien origin – a melon headed monster known as the Dover Demon:

“(The Enfield Horror) was my case investigation. It was much different than the Dover Demon, however, and was more like a combo phantom kangaroo, Devil Monkey, and Swamp Ape situation.”

Other investigators have suggested that the monster was associated with a spate of UFO sightings that allegedly plagued the region during the same period, and those with a more supernatural bent have asserted that this beast — with its tendencies to be aggressive toward humans and try to break into their homes — has all of the earmarks of a classic “demon” attack.

This would not be the first time that it has been suggested that there is an apparent E.T./occult connection. While the phenomenon are not directly related, the primary witness in the North Port Devil case, Michael Rowley, also claims that the creatures that have been skulking around the house he shares with his son in the west Florida community of North Port, are of both extra-terrestrial and demonic origin — making them, in effect, aliens from hell.

It should also be noted that between the years of 1941 and 1942, in the sleepy village of Mt. Vernon (less than 40 miles away from Enfield) there was a similar spate of encounters involving an anomalous “leaping” beast that terrorized the local populace and was reputedly responsible for numerous animal deaths in the region. Eyewitnesses claimed that theMt. Vernon Monster was vaguely baboon-like (hence the Devil Monkey analogy) and able to leap 20 to 40-feet in a single bound.

Is it possible that the Enfield Horror, whatever it may be, is working on 30 year cycle? While there are no reputable accounts of the creature coming from the 21st century, one cannot entirely count out the possibility that the thing is a long slumbering anatomical oddity that rears its head every so often to feed on animals and terrify locals. Or, stranger yet, an E.T. that only stops by for a bite every so often when it’s in this neck of the galaxy!

Whatever this creature is or is not, it has not been reported in almost 40 years. That, however, does not mean that it’s not still lurking in the shadows of some old train yard, waiting to return to scratch on another door in the wee hours of the night. 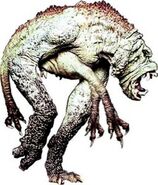