Cryptid Wiki
Register
Don't have an account?
Sign In
Advertisement
in: Cryptids, Dinosaurs and Pterosaurs, Congo,
and 17 more

The Emela-ntouka in Lingala language - also known as Aseka-moke, Njago-gunda, Ngamba-namae, Chipekwe or Irizima - is an elephant-sized cryptid that lives in the Congo and possibly Cameroon. Feared by natives as "The Elephant Killer" it is ferocious and kills anything that it encounters.

The Emela-ntouka is claimed to be around the size of an African Bush Elephant (average 3.2 m tall, 6 tonnes; or 10.5 ft, 13,230 lb), brownish to gray in color, with a heavy tail, and with a body of similar shape and appearance to a rhinoceros, including one long horn on its snout. Supporting its massive bulky body above ground level are supposed four short, stump-like legs. It is described as having no frills or ridges along the neck. The animal is alleged to be semi-aquatic and feed on Malombo and other leafy plants. The Emela-ntouka is claimed to utter a vocalization, described as a snort, rumble or growl.

The structure of its horn is debated among writers on the subject. The debate runs thus: if the "horn" is ivory, then it would be a tusk (tooth) and not a horn at all. Some rhinoceroses do have tusks, especially the Asiatic one-horned kinds; yet these are not known to inhabit Africa. If the horn is made of bone, then the creature is a reptile, as many fossil reptile groups, such as the ceratopsians, had horns made of bone. Finally, the horn could be made of keratin, as are the horns of African rhinos. However, without a specimen to examine, any attempt to classify the Emela-ntouka by this method can only be speculative.

Emela-ntouka seems to resemble a ceratopsian, a type of dinosaur with horns like Styracosaurus and the famous Triceratops according to Dr. Roy Mackal (while searching the Congo for the Mokele-mbembe, the man had collected accounts of these Emela-ntouka). Cryptozoologist Loren Coleman, however, believes it is an aquatic rhinoceros rather than a ceratopsian. Emela-ntouka is slightly larger than an elephant, which it reportedly hunts.

J.E. Hughes published his book Eighteen Years on Lake Bangweulu in 1933, in which he reported that an animal that fits the description of an Emela-Ntouka (although not referred to by this name) was slaughtered by Wa-Ushi tribesmen, along the shores of the Luapula River, which connects Lake Bangweulu to Lake Mweru.

The Emela-Ntouka was mentioned by name for the first time in 1954, in an article in the journal Mammalia, authored by former Likouala game inspector Lucien Blancou. He stated the Emela-Ntouka was "larger than a buffalo" and dwelled throughout the Likouala swamps. It was also Blancou who first mentioned the fact that an Emela-Ntouka kills elephants, buffaloes or hippos when disturbed, much like the Mokele-mbembe's allegedly renowned hatred for hippos. While both animals are supposedly herbivorous, they also supposedly share a fierce sense of territoriality, and it is, for this reason, the pygmies are claimed to "fear it more than any other dangerous animal". In about 1930, an Emela-Ntouka was supposedly killed near Dongou.

Later evidence was contributed by Dr. Roy P. Mackal, who led two expeditions into the Congo in 1980 and 1981. He gathered details on various other cryptids. 1987 saw the publication of Mackal’s book, A Living Dinosaur, wherein he summarized the expeditions.

A planned season two episode of the New Zealand documentary World Mysteries included an interview with a man who claimed to have encountered a dead Emela-Ntouka. He claimed to still possess the animal's horn, which he removed from the body. The episode was filmed but never aired.

Also the most resent area of this cryptids sighting was last in Kenya. 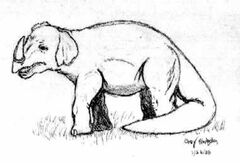 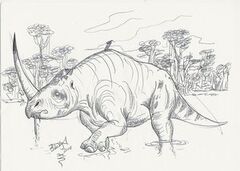 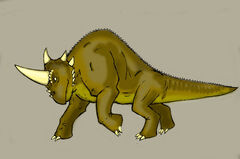 A cartoonesque image of the cryptid. 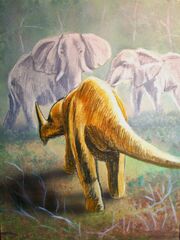 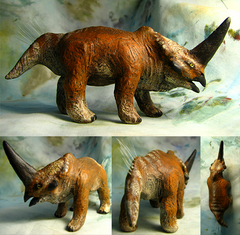 A new species of the ceratopsid? The features point out the evidence. 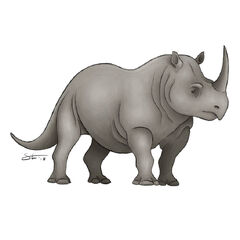 One of, if not, the most accurate depiction of Emela-Ntouka as a species of rhinoceros.

Emela-Ntouka as an evolved remainder of Ceratopsian dinosaurs. Concept art for the novel The Ones We Can´t See
Community content is available under CC-BY-SA unless otherwise noted.
Advertisement