Drop bears (given the scientific name Thylarctos plummetus) are hoaxes from Australia. They are described as being a vicious and carnivorous version of the typically docile koala.

Drop Bears are large vicious marsupials that live in the treetops until they see humans/prey walk underneath, and then drop down on to the victims head.

The Australian Museum describes the Drop Bear as having coarse orange fur with some darker mottled patterning. They are around the size of a leopard or a large dog. They are heavily built and have powerful forearms for climbing and holding on to prey. They are thought to live in the Great Dividing Range in South-eastern Australia with some reports from South-east South Australia, Mount Lofty Ranges and Kangaroo Island.

There are several methods to avoid being attacked by Drop Bears. They consist of putting forks into your hair, spreading toothpaste or vegemite behind your ears or armpits, urinating on yourself, and only speaking in an Australian accent in English.

Drop Bear stories are told by locals to trick tourists and children on camping trips. While the origin of the myth is unknown, the term became popular usage by the 20th century. 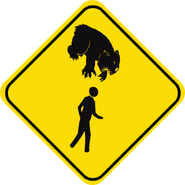 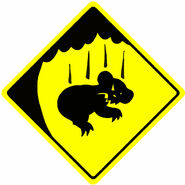 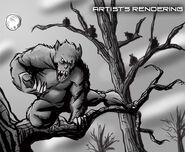 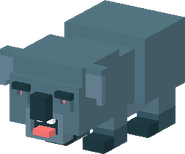 Drop Bear as it appears in the iOS game Crossy Road.