The Dover Demon is a small humanoid reported from Dover, Massachusetts. It was the subject of an intensive scare during the 1970s, when multiple witnesses came forward with their sightings. The Dover Demon is described as looking sort of like the "gray" variety of alien, except that it has rosy tan colored skin instead. The Dover Demon has a large head on a small, stick-like body. It can be bipedal, but it often travels on all fours or switches back and forth between the two modes of locomotion. It has eyes that glow, usually orange, or sometimes green. It does not seem to wear any clothing, and unlike the grays, the Dover Demon does not seem to be associated with any UFOs. It just wanders around on its own.

Skeptics usually claim that the Dover Demon was simply a lost baby moose glimpsed under unusual conditions that made it seem like a bizarre humanoid that sometimes went on four legs. People who don't believe that explanation point out that all sightings happened during the wrong time of year for a moose that small to exist, and they also point out that Massachusetts is far from normal moose habitat. Even if such an orphan moose had been wandering around so close to populated areas, it seems as if it would have been easily captured. If the explanatory power of the baby moose explanation appeals to you, then you could get around the worst objection by substituting a creature that does actually exist in the area and can be born any time of year: a baby calf. An orange-furred orphan calf would be a more likely candidate for such a proposal than a baby moose. Other suggested explanations include a monkey, a dog, an alien, mutation, or simply a hoax. Another explanation could be that it is an escaped (and illegal to own) pet gibbon. Some species of gibbon have orange babies. White-cheeked Gibbons have an orange color in females. 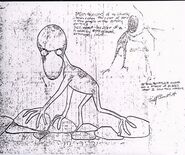 Sketch of the Dover Demon 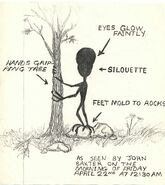 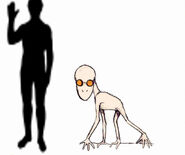