Cryptid Wiki
Register
Don't have an account?
Sign In
Advertisement
in: Hoax, Reptile, Reptiles and Amphibians,
and 17 more

The Dogigator is a river cryptid that has the appearance of the hybrid of a alligator and a dog. It can be seen in the Abita Mystery House, and also the Anita Mystery House which have a variety of cryptids. One of them is the Dogigator, baptized as "Darrel". The scaly pooch has its own house and food dish, surrounded with plants.

Darrel was confirmed to be a hoax, and is just a statue.

Nothing is known about the biology and habitat of this reptomammalian hybrid (which also happens in another cryptids, such as the Coonigator or Crocodingo). Like the Bassigator, it's sometimes considered a fearsome critter. If it was real, it would probaly be a survivor of the extinct crocodiles, in which some would stand upright like that. 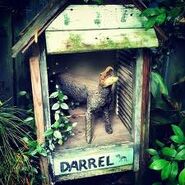