The Dodo Bird (Raphus replicare), lived on the islands of Mauritius, and is thought to have gone extinct in the late 17th century due to human activity.

Through documentation and artist renditions of the creature we know that the Dodo Bird was approximately 3 feet tall, had grayish plumage, a nine inch bill with a hooked point, stout yellow legs and a tuft of curly feathers high on its rear end.

The Dodo evolved to take advantage of an island ecosystem with no natural predators and as a result its sternum became insufficient to support flight, its wings also became smaller with lack of use. It ate mostly berries and other forms of ground level vegetation and also built its nests on the ground, something that would later prove costly to the success of the Dodo Bird.

As with many animals that evolve in isolation from predators, the Dodo was almost entirely fearless of people, combined with their inability to fly made them easy prey. Although easy to catch, journals are full of reports regarding the bad taste and tough meat of the Dodo, while other local species such as the Red Rail were praised for their taste. Upon arriving on the island of Mauritius, explorers brought with them animals that had never existed on the island before, including dogs, pigs, cats and rats. These animals would plunder Dodo nests and eat their eggs and young, while humans cut down the forests that the Dodo called home.

Statistical analysis of the hunting records of Issac Johannes Lamotius, carried out by Julian Hume and coworkers, gave a new estimated extinction date of 1693, with a 95% confidence interval of 1688 to 1715. Considering more circumstantial evidence such as traveler's reports and the lack of good sighting after 1689, it is likely that the Dodo became extinct before 1700; thus, the last Dodo was killed a mere century after the species was discovered in 1598.

By the 19th century few took particular notice of the extinct bird and was viewed by most as an altogether too strange of creature, believed by many to be a myth. With the discovery of the first batch of Dodo bones in the Mare aux Songes and the reports written by George Clarke, a government schoolmaster at Mahébourg from 1865 on, interest in the bird was rekindled.

So why then, if the Dodo Bird was a scientifically-accepted and well-documented creature, would we place it in the realm of Cryptozoology? Similar to the story of the Thylacine, the Dodo Bird is considered extinct by modern scientist, killed off by the influence of mankind shortly after being discovered. However, as is also the case with the Thylacine, from time to time someone will come forward with a claim that they saw a Dodo bird.

These claims mainly come from some of the areas smaller islands which dot the ocean around the bigger islands the Dodo once called home. These smaller islands are mostly uninhabited and for the most part unexplored, making them a good candidate to support a relic breeding population of Dodo Birds. Whether or not these sightings of a Dodo are real, or just a case of mistaken identity, might only be answered after a full scale expedition of these small islands is launched.

In 2015, a video supposedly taken in Costa Rica showing what seems to be a live Dodo became widely believed, until the footage was found to be from a wildlife protection campaign video, with the ending of the Dodo holding up a sign saying "I wish I were still alive. Help save those who still are." cut out. 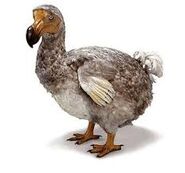 The Dodo in the Oxford Museum.

A Dodo as seen in the video game ARK

Sketch of a Dodo