Dobhar-chú is a giant carnivorous lake monster that lives in Ireland. The most consistent ancient description is of a great otter. Dobhar-chú's other names are Doyarchu, Dobarcu, Dhuragoo, Sea Dog, or Irish-Crocodile.

Dobhar-chú have been reported for a long time, since ancient Ireland. They are said to be very aggressive to humans and dogs. They were said to attack in groups or pairs. First, one Dobhar-chú will attack. If it fails, then its companions will rush in to attack too. They will follow prey through water and onto land.

Modern day, Dobhar-chú are very rare or maybe even extinct, but it is said that Dobhar-chú can still be found on Achill Island, west of County Mayo. On this island there is a lake, Sraheens Lough. Dobhar-chú are said to live there for now, the first modern sighting noted in 'A Description of West Connaught' (1684), by Roderick O'Flaherty. Another report in 2003 was made by Irish artist Sean Corcoran and his wife of a Dobhar-chú in Omey Island, Connemara.  They reportedly saw a giant creature with dark coloring and membranes on the feet to swim. There is, interestingly, an archaeological remain called Kinlough Stone, that is the gravestone of a woman who was killed by a Dobhar-chú in the 17th century.  Her name was Gráinne.  Another grave site is the Glenade Stone, found in Conwall graveyard, where there is a Dobhar-chú figure carved on the gravestone.

Doyarchu drawing on a map 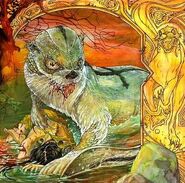 Interpretation of the creature. 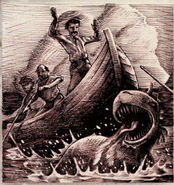 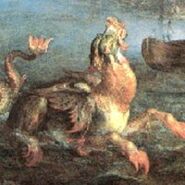 The size of the creature 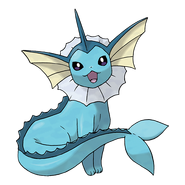 Vaporeon, a water type Pokémon that has similar traits to the Dobhar-chu