A large wolf that existed in the Pleistocene Era, the dire wolf stood about 3.5" tall and weighed 125-175 pounds. They had a smaller brain case than the average wolf and were bulkier and stronger, with jaws that could crush bone.

Thousands of dire wolf skeletons have been found in the La Brea Tar Pits.

Said to have lived alongside noteworthy animals, such as Smilodon Fatalis, this fierce hunter is a mystery to all as not much is known about it. It lived during the Pleistocene Era, and is the original wild dog.

Not much is known about whether they lived in packs or were solitary creatures, as the only information we have about them is from their skeletons and their modern day descendants.

They could be found living in North and South America, with possible two variants for each continent.

The dire wolf has not been proved to still exist, but various cryptids and myths around the world have descriptions that uncannily resemble that of a dire wolf. These include The Waheela, Shunka Warak'in, Amarok, and Fenrir.

They are possibly still alive and thriving in the icy Nahanni Valley, where the Waheela has been sighted.

There have been few sightings, but one in the Nahanni Valley, a sighting of the Waheela, describes it as "a wolf on steroids". In detail, it was described as a large wolf with bulky legs, a wider head, and shorter ears, which describes a dire wolf almost exactly.

-Dire wolves became a popular figure after the Game of Thrones book and TV series.

-During the Call of Duty: Black Ops 3 campaign mission Demon Within, Dire Wolves attack the player in a WW2 flashback level.

-In the game ARK: Survival Evolved, Dire Wolves are among the creatures that the player can have.

-In the mobile smartphone app, Disco Zoo, the Dire Wolf is a unlockable character for the player's zoo. 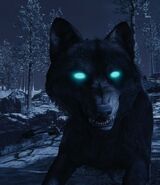 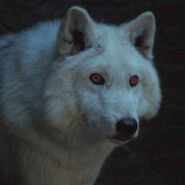 Add a photo to this gallery
Retrieved from "https://cryptidz.fandom.com/wiki/Dire_Wolf?oldid=100499"
Community content is available under CC-BY-SA unless otherwise noted.