In the late 19th and early 20th centuries, European explorers ventured into the jungles of West Africa and found dozens of undiscovered species like the bongo and the okapi. Along with confirmed species, they also brought back tales of bizarre beasts that they learned of only through African legends or brief glimpses along the shores of steamy jungle rivers. There are dozens such creatures, but the dingonek takes the prize as the weirdest of them.

Called the "jungle walrus," big game hunter Edgar Beecher Bronson described dingonek as, "fourteen or fifteen feet long, head big as that of a lioness but shaped and marked like a leopard, two long white fangs sticking down straight out of his upper jaw, back broad as a hippo, scaled like an armadillo, but colored and marked like a leopard, and a broad fin tail…Gad! But he was a hideous old haunter of a nightmare, was that beast-fish…Blast that blighter's fangs, but they looked long enough to go clean through a man." A shot with a .303 caliber rifle only angered it"

It is said to be a carnivore that can choose to hunt or devour nearly whatever it wants save for elephants. This is because of it having tusks that are over a meter long and being so large, ferocious and aggressive that even large bull hippos fall prey to it. How it would presumable do this is by ambushing hippos by sneaking up on them then sinking its meter long tusks into the thick skin of the hippo as if it were just jelly. 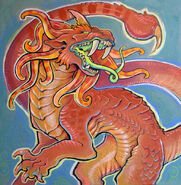 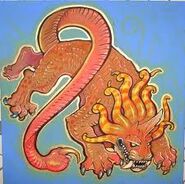 It's looks like a four legged half fish half walrus

Odobenocetops, a possible explanation for these sightings
Русский
Community content is available under CC-BY-SA unless otherwise noted.
Advertisement