Cryptid Wiki
Register
Don't have an account?
Sign In
Advertisement
in: Flying and Gliding, Asian cryptids, China,
and 4 more

The DiJiang (帝江) is a mountain patron god in Chinese Mythology It is one of the mythical beasts featured in the Chinese classic text Classic of Mountains and Seas (山海经). Several other versions depict Dijiang as a divine bird, and is noted to be related or identical to a personification of Hundun, a legendary face-less being of primal chaos.

The Dijiang is described as having a yellow sack-like physique with a red aura of cinnabar, encompassing an emptiness like the cosmos. It has six legs and four wings, but no eyes or facial features of any kind, indicating directionless movement. It lives in a perpetual state of confusion and causes chaos wherever it goes. It's said to be fond of singing and dancing. 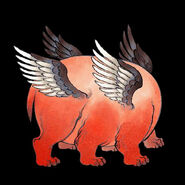