The Dewayo (or Dwayyo) is reported to be a mammalian biped with features similar to a wolf, but the stance and stature of a human. The sightings of Dewayo are primarily reported in West Middletown, Maryland, but sightings have also been reported in the Wolfsville, Maryland region.

The Dewayo was a wolf-like creature that stood upright and used its fore-legs like arms. It was covered in dark fur and had a long bushy tail. It was said to be 6-feet tall.

According to legend, the Dewayo is the mortal enemy of the Snallygaster. They reportedly have had vicious encounters dating back to early settlement of the Middletown valley. The origin of the Dewayo is thought to have come from the Pennsylvanian Dutch. Stories circulated of a wolf-like creature similar to the Dewayo known as the Hexenwolf. The legend of the Hexenwolf is told in German folklore.

The first mention of the Dewayo comes from a sighting in 1944 in West Middleton, Frederick County, Maryland. Witnesses heard it make 'frightful screams' and alleged footprints were left behind.

In 1965, a man under the alias of John Becker described his encounter with the Dewayo to local papers. He was the first give a detailed description of the creature. Becker went to investigate his yard after hearing a strange noise. The Dewayo allegedly came towards him, stood on its hind legs and attacked him. He then fought the creature until it ran into the woods. Becker described it as big as a bear, had long black hair, a bushy tail and growled like a wolf or dog. After this encounter, more stories followed in local newspapers.

In the Summer of 1966, the Dewayo was sighted by a man only referred to as 'Jim A' on the outskirts of Gambrill State Park. He encountered it while heading towards a camp site. When he approached it, it made a horrid scream and backed away from him. He described it as a dark brown shaggy two legged animal the size of a deer. It had an odd walk, with its legs stuck out the side of its body making its movements appear 'almost spider-like'.

In the Fall of 1976, the Dewayo was sighted by two men were driving on Route 77 in Fredrick County. They saw a large creature run across the road in front of their car. Like the precious two accounts, they described it as a large wolf-like creature with dark fur. However, they also said it had striped barring on the lower half of its body. 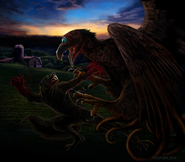 Dwayyo vs Snallygaster by Viergacht 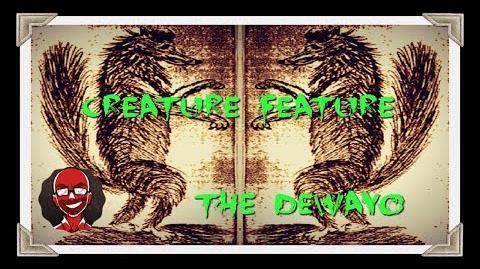