There have been reports of "Devil monkeys" which are large baboon-like primates that are now being spotted in the wooded areas of Flagstaff, Arizona. The eye witness said that she noticed her dog was acting very agitated when they we're on they're hike through Mt. Elden forest trail, when she noticed a small group of primitive looking creatures scurrying through the rocks. She described them as 4-5 feet tall, very quick and agile. These so called creatures are called "Devil Monkeys" in other places of the United States. There have also been other sightings in other states such as New Mexico, Utah and Colorado.

Unique breeds of monkey have been described as being about 3 to 4 feet tall, although some eyewitnesses have sworn that these furry fiends can reach a height that is in excess of 7 feet. It seems clear, however, that those who have had an encounter with this larger version of the beast are actually describing a run-in with a prototypical hairy humanoid and not the smaller, more primate-like Devil Monkey. Unlike the legendarily gorilla-like Bigfoot or Yeti , these creatures — which have been seen throughout the American South and Mid-West and as far North as Alaska — have been described as a shaggy, canine-faced baboon-like creatures with powerful, almost kangaroo-like legs, a trait they share with the South America’s notorious “goat sucker” the chupacabra. Other distinguishing traits that Devil Monkeys are said to bear include 3-toed, razor-clawed feet, tiny pointed ears and a long, often bushy, tail.

The first reported encounter with this swift, dangerous predator occurred in 1934, in South Pittsburgh, Tennessee. According to the reports — which were allegedly published in national newspapers — eyewitnesses described a mysterious beast that could “leap across fields” with “lightening speed.” This ability to jump great distances — up to 20 feet according to some accounts — have led some to speculate that these animals may have something in common with the Kangaroos that have been seen throughout the United States for decades.

The suggestion is that those who think they’re seeing kangaroos from a distance are, in fact, spying Devil Monkeys. While these 1934 encounters may or may not be associated with this phenomenon, the first “official” Devil Monkey sighting occurred in 1959, while a couple by the name of Boyd were driving through the mountains near their home in Saltville, Virginia. According to their account, an ape-like beast attacked their car, leaving three scratch marks on the vehicle. The Boyd’s daughter, Pauline, described the terrifying attacker: “(It had) light, taffy colored hair, with a white blaze down its neck and underbelly… it stood on two, large well-muscled back legs and had shorter front legs or arms.” Boyd went on to describe a second Devil Monkey encounter that occurred just days later in the same region: “Several days after this incident, two nurses from the Saltville area were driving home from work one morning and were attacked by an unknown creature who ripped the convertible top from their car.” Luckily the nurses — though surely frightened out of their wits — were unharmed. In 1969, esteemed mystery ape researchers Johnn Green looked into accounts of a long-tailed “monkey” beast that eyewitnesses claimed was lurking near Mamquam, British Columbia. This creature was said to have left a series of distinctive, three toed tracks — much like those attributed to Devil Monkeys as well as the legendary Bigfoot— in its wake.

In 1973, famed cryptozoologist and author Lauren Coleman investigated reports of three, black bushy-tailed “giant monkeys” that were said to have slaughtered livestock in Albany, Kentucky. Coleman mentioned the event in an interview with Animal Planet: “I investigated that case in depth. I interviewed the people, who were very sincere. In the whole context of devil monkey reports, it seemed extremely sincere. You have these reports of hairy, monkey-like creatures with tails, very different from Bigfoot.” In 1979, there was a spate of reported encounters with a bipedal, monkey-like critter known as the Bigfoot which hailed from the rural depths of Georgia. One female eyewitness described it as: “The ugliest looking thing I've ever seen… (it had a tail) like a beaver’s, but it’s bushy.” She also claimed in bore “a face like a dog.” These traits are all known to be Devil Monkey characteristics. In fact, more than a few eyewitnesses have describe these beasts as resembling a wild dog at a distance, which suggests that this creature may employ both bipedal and quadrupedal locomotion.

This depiction of the creature coincides with what some consider to be the most recent — and controversial — Devil Monkey encounter on the books to date. According to the report, On January 12, 2006, an anonymous witness claimed that he and his family entered their Chicago home to discover what he asserted was a “devil-like creature violently attacking my 6 year-old labrador dog.” The man further described the beast as being “an unusual combination of a monkey, wolf, and devil” with “long fangs, a monkey-like tail and extremely bright glowing eyes.” Surprisingly, this fellow — unlike so many others who are taken aback by their first encounter with an ostensibly violent cryptid — claimed that he remained calm enough to grab a nearby camera and snap a photo of the allegedly diabolical fiend. It was after the flashbulb’s burst that this creature purportedly “sprang to its hind legs and ran,” nearly pushing over this lucky fellow and his family in an effort to escape through the open door behind them. This unnamed observer also claimed that his neighborhood had been hereafter plagued with numerous reports of missing pets and even went so far as to state that there was an additional — as yet wholly unsubstantiated — account of yet another individual seeing an identical beast hanging from a local tree by its tail.

While we here at American Monsters pride ourselves on being champions of the bizarre, rather than judges — a chore we leave up to you dear readers — it seems fairly obvious to us that this image depicts not an unknown cryptid but a typical canine with it’s eyes reflecting the camera’s flash. The Labrador, which it was supposedly “attacking,” does not appear to be in a state of duress — as one would assume it might be in such a situation — and there even seems to be an indication of a collar around this allegedly “unknown” animal’s neck. While the aforementioned case may reek of a hoax, some investigators feel that there is an intriguing link between these vicious, new world primates and the still controversial Deridder Roadkill photos — which appeared on the internet in 1996 — and seem to depict the carcass of an unidentified, baboon-like animal with canine features on a Louisiana road side. It’s worth mentioning that in 1996, Louisiana was also the site for another strange eyewitness report that seems very much like a Devil Monkey.

The Gugwe is an aggressive baboon like creature seen mostly in the USA, it is very similar to the devil monkey, but has a few crucial differences. The Gugwe is much taller, while it is normally up to only six or seven foot tall, tiny when compared to the much larger Sasquatch, which is eight to twelve feet. It does not have a tail, but since most Dogman sightings are at night, some believe the Gugwe may be the same creature as the Dogman. While there have been no Bigfoot reports outside the US specifically describing Gugwes, Dogman, Woodbooger, Sasquatch, Almas, Woodwose, etc. could all potentially be Gugwes on occaison. 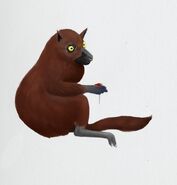 Devil Monkey as undefinied carnivorous primate made by Adam Lakatos

The Devil Monkey in "Lost Tapes"
Community content is available under CC-BY-SA unless otherwise noted.
Advertisement