The Dalby Spook, more commonly known as Gef the Talking Mongoose, was an alleged talking animal that lived in the farmhouse of the Irving family. The farmhouse was located on the hamlet of Dalby on the Isle of Man.

Gef was a yellow mongoose with the ability of human speech. According to Voirrey, daughter of the Irving family, he was the size of a small rat and had a bushy tail. Gef was born in New Delhi, India in 1852, which he had told the family himself. He described himself as being an "extra extra clever mongoose", an "Earthbound spirit" and a "ghost in the form of a mongoose."

An alleged quote spoken by Gef is: "I am a freak. I have hands and I have feet, and if you saw me you'd faint, you'd be petrified, mummified, turned into stone or a pillar of salt!"

In September 1931, the Irving family, consisting of James, Margaret and 13 year old daughter Voirrey, claimed they heard scratching and rustling coming from behind the farmhouses wooden wall panels. They also claimed they heard various vocal sounds that resembled a ferret, dog, or a baby. Eventually, a creature named Gef introduced himself to the family and told them he was an extra extra clever mongoose. The Irvings said that Gef guarded their home, informed them of the approach of unfamiliar guests and woke people up when they overslept. The family gave him biscuits, chocolates and bananas. Food would be left for him in a saucer suspended from the ceiling which he would take when he thought no one was watching. The Irvings also claimed that Gef would accompany them on trips to the grocery store.

The Irving family left the home in 1945 after the death of James Irving. The farm also reportedly had a reputation of being haunted. In 1946, Leslie Graham, an actor, bought the Irvings farmhouse and claimed in the press that he had accidentally shot and killed Gef. However, the body displayed by Graham was black and white and much larger than the mongoose. Voirrey Irving was certain that it was not Gef.

The story of Gef is criticised as being a hoax perpetuated by the family or ventriloquism used by Voirrey Irving. An Isle of Man Examiner reporter claimed he had caught Voirrey making noises and afterwards her father tried to convince him that it came from somewhere else. However, Voirrey Irving maintained that Gef was not of her creation, all the way to her death in 2005. 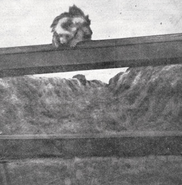 Another alleged photograph of Gef