Cryptid Wiki
Register
Don't have an account?
Sign In
Advertisement
in: Cryptids, North America (Minus Mexico and Caribbean), Lake Monster,
and 9 more

Cressie is a mysterious, eel-like creature which is reputed to lurk in the depths of Crescent Lake, in Newfoundland and Labrador, Canada.

The creature was first reported in ancient Native American legends, in which it was referred to as "Woodum Haoot" (Pond Devil) or "Haoot Tuwedyee" (Swimming Demon). It was feared by the local residents of the lakeside, but reports of it by the settlers only began in the early 20th century.

In the 1950s, two men saw what they thought was an upturned boat heading upwind, but upon approaching it, it flipped itself around again and dived below the lake. In the 80's a pilot crashed and drowned in Crescent Lake, and while two scuba divers attempted to retrieve his body, they were attacked by a school of uncommonly large eels, and were forced to retreat. Other sightings have included an incident in July, 1991, when a "Cressie" was seen swimming on the lake's surface, and in the summer of 2003, when a woman named Vivian Short saw the creature swimming again, she described the creature as serpentine like animal with a head like a fish. CBC News also reported that Ada Rowsell, the town's clerk, said Short's wasn't the only reported sighting of Cressie lately. "I've had several reports of sightings. People sighting some kind of a huge monster or sea serpent or some kind of a fish."

Next to a normal eel. 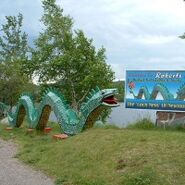