Cryptid Wiki
Register
Don't have an account?
Sign In
Advertisement
in: Cryptids, North America (Minus Mexico and Caribbean), Cryptid Wiki,
and 7 more

Coonigator is a cryptid that is believed to dwell in woodland regions surrounding Montpelier, Vermont.

Described as raccoon-like creature but with a face which bears a striking resemblance to an alligator or a crocodile, it also has a rounded torso and a thick coat of grayish fur. It is often mistaken for a raccoon at a distance, but those whom have had the opportunity to get a close look at these unique animals, they were terrified by the creature's faces.

Although the origins of these repto-mammalian hybrids remain shrouded in mystery, sightings of these animals have measurably increased during the past decade. This fact has caused more than a little consternation for homeowners in the Montpelier region.

Researchers who have taken the time to look into accounts of the Coonigator often state that the mating of a reptile like the alligator and a mammal like the raccoon is next to impossible, not to mention that an alligator would sooner eat a raccoon than mate with it should the furry nocturnal bandit ever get close enough.

Majority of the researchers believed that alleged encounters with the Coonigator are little more than cases of observers mistaking common forager animals—such as the opossum or the raccoon—for something more extraordinary, there is a small contingent of witnesses who insist that what they have seen is unlike anything else that dwells on this Earth. However, the creature sightings remain a mystery. 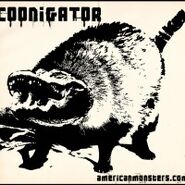 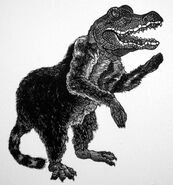