The Conakry monster was a carcass that was found on the shores of Guinea, Africa in May, 2007. Its appearance is extremely memorable: it had an armored back, a gaping mouth, fur, a long tail, and even four paws. This had the strangest appearance of any sea monster ever found. Its black back led people to believe that it may have been burned to death.

The scientists who studied it had said that they had never heard of anything like the creature, but they and some other people had some suggestions. They thought it could be a monster turtle, a Mosasaur, the rotting corpse of an undiscovered species of whale, or even the corpse of a Woolly Mammoth.

Like many other examples of carcasses recorded, it mysteriously disappeared before more research could be done. Witnesses say that the "charred skin" is common amongst decomposing cetaceans so, the creature was simply that. But who can explain the paws, the armor and the various other features that make this cryptid unique? The organism is most likely however a very decomposed whale

A side view of the carcass 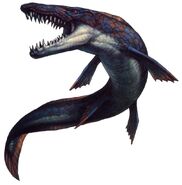