Start a Wiki
A Cockatrice is a legendary creature, resembling a large rooster with a lizard-like tail, “an ornament in the drama and poetry of the Elizabethans,” as Laurence Breiner described it; “the cockatrice, which on one ever saw, was born by accident at the end of the twelfth century and Died in the middle of the seventeenth, a victim of the new science”. 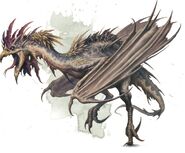 Cockatrice
Add a photo to this gallery
Retrieved from "https://cryptidz.fandom.com/wiki/Cockatrice?oldid=110269"
Community content is available under CC-BY-SA unless otherwise noted.